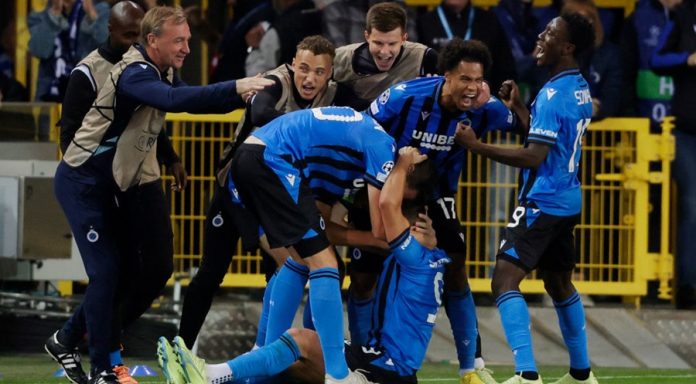 The Belgian side have won their three opening games without conceding a goal and dominated Diego Simeone’s side for much of the game, triumphing thanks to Kamal Sowah and Ferran Jutgla’s strikes.

Antoine Griezmann, given a rare start, missed a second-half penalty for Atletico, who are level with Porto and Bayer Leverkusen on three points each, after the German side lost 2-0 in Portugal.

Alvaro Morata should have sent Atletico ahead after breaking into the box but former Liverpool goalkeeper Simon Mignolet saved his low strike after a tight opening spell.

Brugge should have doubled their lead at the start of the second half but Jan Oblak made a fine save to deny Jutgla, after fine work by Canadian Tajon Buchanan, with Atletico’s defence sleeping on the job.

Yannick Carrasco lashed an effort well wide and Griezmann sent a shot into the side-netting as the visitors reacted to the wake-up call.

However the effervescent Buchanan teed up Jutgla to finish with aplomb in the 62nd minute. The 23-year-old striker is in a rich vein of form – this was his eighth goal in 11 games across all competitions.

Griezmann crashed a penalty off the crossbar after Matheus Cunha was felled in the box, then had a goal ruled out for offside as Atletico’s frustration grew.

Mignolet beat away Joao Felix and Angel Correa efforts in the final stages to secure a noteworthy victory for his team, and leave the 2014 and 2016 runners-up with a lot of work to do.