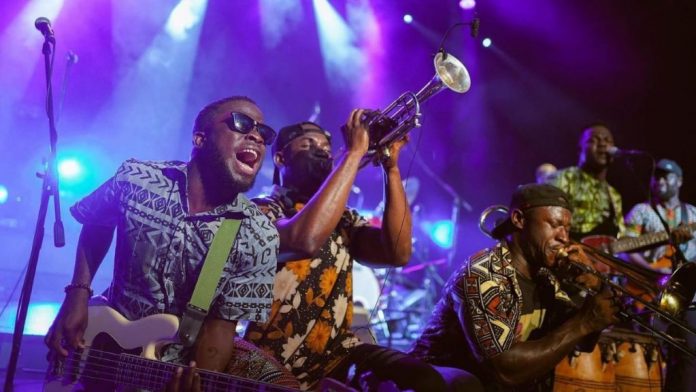 Vintage-inspired highlife, funk & Afrobeat band from Ghana, Santrofi, are currently playing their “Deep Into Highlife” tours in support of their outstanding discography.

With a handful of major shows scheduled throughout the summer of 2022, the group, which is a collective of celebrated young musicians known within Ghana’s music circles, opened the tour in May at Jam ‘N’ Jette in Belgium and will wrap up at Sziget Festival in Budapest, Hungary at the end of summer, playing a total of over 30 dates.

In between, the band has made great appearances with convincing performances in multiple cities across the world, notably UK, Germany, Finland, Slovannia and are expected to make several stops in the coming weeks. The young Accra-based outfit were supported by some renowned musicians, including critically acclaimed Ghanaian artist, Wiyaala, and sensational rapper Yaw Tog.

The band’s recent stop was at Rudolstadt Festival in Germany. They dazzled festival crowds by fusing precise instrumentation with sharp dance steps. A high-octane blend of punchy jazz horns and call-and-response performance, they gave an impeccable delivery.

Very proverbial of the new vintage-inspired Highlife, Highlife Funk and Afrobeat, Santrofi are a collective of celebrated young musicians known within Ghana’s music circles. Led by Bassist/ producer Emmanuel Ofori who rose from the immutable Ebo Taylor, and Pat Thomas and Kwashibu Area Band to form his own collective deeply informed by vintage Ghanaian highlife music in all its forms. This wall of sound, although long lost and forgotten, is back with effortless ease and with a progressive edge like it never left.

Their debut album ‘Alewa’ captures the influence from the diverse, yet, intertwined eras of the journey of Ghana’s Highlife’s music. Santrofi are determined to revive the fortunes of a music that offers a lighter, breezier alternative to Fela’s intense, funk-fuelled marathons, the Guardian reports. Highlife’s swift, skipping rhythms are here, albeit supercharged for modern times, along with nimble guitar codas and a slick horn duo of trumpet and trombone, the publication added.