Simeone v Ancelotti: The key duel in the Madrid Derby in LaLiga Santander 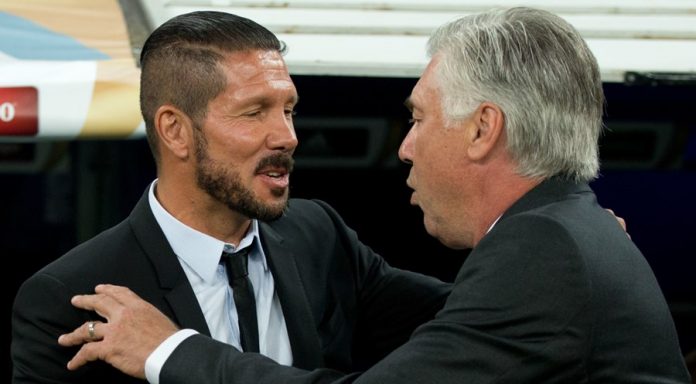 The Madrid Derby is much more than a football match. It’s not just about the battle for three points; it’s about securing victory for the two passionate fanbases that exist in the Spanish capital. And few men know this better than coaches Diego ‘Cholo’ Simeone and Carlo Ancelotti.

The two know each other perfectly, and taking into account the Italian coach’s two spells at Real Madrid, they’ve met on six different occasions in LaLiga Santander. The balance is in favour of the Argentine. With El Cholo at the helm, Atleti have managed to win four of the six Madrid Derbies against the Italian.

Overall, across all competitions, it’s seven wins for Simeone, six wins for Ancelotti and four draws in their 17 meetings.

The first Madrid Derby between Simeone and Ancelotti

The first time these two iconic coaches faced each other in LaLiga Santander was in the 2013/14 season. It was Ancelotti’s first season as Real Madrid coach, and perhaps the Argentine’s experience in this type of derby played a key role. Atlético de Madrid shocked the Santiago Bernabéu crowd, earning a 1-0 win with a fine 11th minute goal from Diego Costa.

That same season, which Atleti ended as champions, the return derby at the old Estadio Vicente Calderón ended in a 2-2 draw. Karim Benzema opened the scoring three minutes before Koke equalised with a fine cross-shot. Just before halftime, Los Rojiblancos turned the game around with a shot from almost midfield by Gabi. Cristiano Ronaldo then equalized in the 82nd minute, producing the only league draw between Simeone and Ancelotti to date.

The following season, Simeone managed to win both Madrid Derbies. Atleti walked away from the Santiago Bernabéu with a 2-1 win, before storming to a historic 4-0 win in an unforgettable encounter at the Vicente Calderón.

One win each last season

Having failed to get one over Simeone in his first stint in LaLiga Santander, Ancelotti secured his first Madrid Derby league win in the 2021/22. Goals from Karim Benzema and Marco Asensio earned Real Madrid a 2-0 victory at the start of last campaign, in which Los Blancos won the championship. In the second meeting, towards the end of last season, Atleti earned some revenge against the champions by winning 1-0 at the Metropolitano courtesy of a Yannick Carrasco penalty.