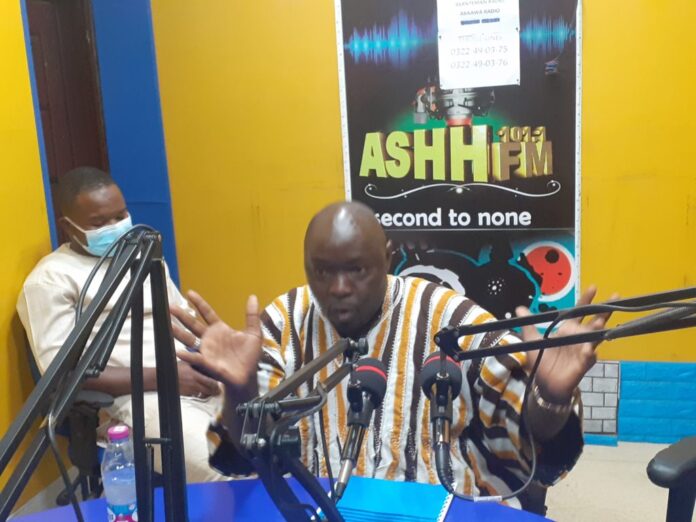 Alhaji Alidu Seidu, NPP Parliamentary Candidate for the Asawase Constituency has vowed to unseat the current Member of Parliament (MP) for the area come December 7.

According to him, Asawase is now seeing the light and has decided to change their voting pattern both presidential and parliamentary.

Alhaji Alidu Seidu who doubles as the Municipal Chief Executive is seeking to capture the Asawase seat from the opposition National Democratic Congress (NDC), which is currently occupied by Minority Chief Whip in Parliament, Alhaji Muntaka Mubarak.

Several attempts by the NPP to obtain the seat of the NDC’s stronghold in previous elections have not been successful.

But Hon. Alidu believes he would wrestle power from the NDC in the December general elections.
‘The chances of the opposition National Democratic Congress (NDC) in retaining the Asawase constituency seat is not guaranteed, New Patriotic Party (NPP) Candidate, Alidu Seidu has said.

According to him, the constituents are tired of Hon. Muntaka Mubarak who has been on the seat for the past 16 years.

“It is time for the NPP led by President Akufo-Addo and I as Parliamentary Candidate to bring total positive change to the constituency as we have been doing since 2017 at the municipal level,” Hon. Alidu Seidu told show host Oderfour Qwasi Kay in a One-on One Interview on Ashh Fm’s National Agenda Monday, 16th November, 2020.

He cited how he lost the 2016 elections to Hon. Muntaka with just 565 votes and is optimistic of a resounding victory in December 7.

‘Let me take this opportunity to refute the assertions that I failed to protect our ballot that is how come that Hon. Muntaka sails through , that assertions are false and must be treated with the contempt it deserves’
“Under my tenure as MCE for the area I have built a lot of infrastructure, provided jobs to the youth and provided other social amenities, and I will do more after the elections,” he stated confidently