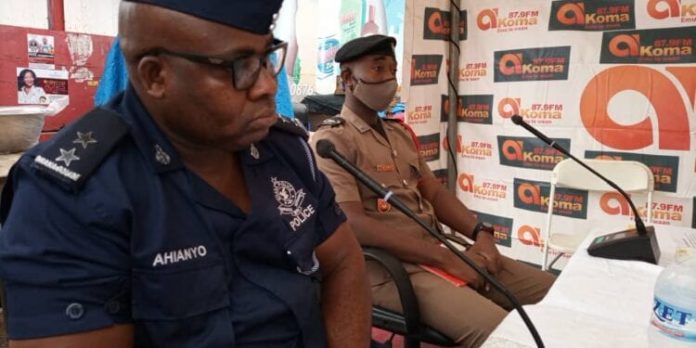 Police in Ashanti Region has arrested 30 suspected criminals and burnt their makeshift hideouts in some areas identified as volatile and hotspots within the capital city, Kumasi.

Wednesday’s swoop was done at Aboabo Number 2, a suburb within Asokore Mampong Municipality, identified as a major hub and hideouts for suspected criminals within Kumasi and its environs.

The exercise, according to the Ashanti Regional Police Command, is in a bid to rid the city of heightening insecurity spearheaded by some unscrupulous people.

Speaking on Akoma FM‘s current affairs and political show GhanAkoma on Thursday, July 29, spokesperson for the regional command ASP Godwin Ahianyo explained that some weapons and sharp objects were obtained from the swoop.

“During the Wednesday swoop, we arrested 30 suspects and burnt their hideouts, we also obtained gadgets such as local pistols, machetes, drugs and other stuff.”

He further explained that “we will parade them for identification and profile them then arraign them for court. We want to assure the public that this is not a nine-day wonder. We will visit all the hotspots in Kumasi to defuse the various base and hideouts of the criminals”.

The Command also appealed to the general public to assist with information on suspected behaviors to ensure Kumasi residents go about their normal duties with assured safety.