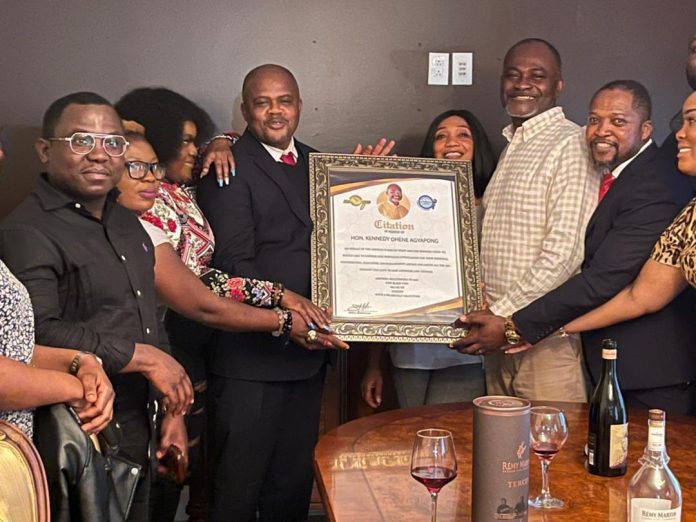 A reputable radio and TV station in Bronx, New York has honored the Member of Parliament(M.P.) for Assin Central, Hon. Kennedy Ohene Agyapong with an award.

Hon. Kennedy Agyapong, who is one of the most benevolent MPs in Ghana, was in the US for a short visit.

The the media house took cognisance of the significant contributions made by the MP in Ghanaian politics for many years and the development of Ghana at large.

Presenting the citation, Mr. Vincent Jerry Asare, a.k.a. Mc O’Gee, a journalist of Adinkra Radio, expressed appreciation and gratitude to Mr. Agyapong for his dedicated, selfless and exemplary service to mother and human development. He observed that, if all politicians were like Hon. Agyapong in terms of his passion for human-centred prowess and outstanding accomplishments towards economic justice, Ghana would change for the better.

The citation reads as “You have been an epitome of truth and bravery in Ghana Politics for so long.
You have stood with truth and fairness as your values which has set you miles apart from your fellow Politicians in Ghana

Your acts of charity and philanthropic works cannot be forgotten
You are a father, a brother and a comforter to the needy and the less privileged in society.
You honoured our invitation to come to come on Adinkra Radio, Bronx NY to speak on current issues happening in Ghana and provided us with life changing advice for all our audience around the world
We honor you Honourable
And we pray your life becomes a burning memory of change for every young Ghanaian today.”

The Assin Central M.P., who is also one of the pillars of the New Patriotic Party and a grassroot person, thanked the the station and staff for the honour done.

He used the occasion to advise Ghanaians especially the youth both home and abroad to always put their destiny into their own hands and strive to do something for themselves and Ghana.

Present at the ceremony was Mr. Prince Adjei, popularly known as Guy Gee, a Public Administration practitioner and was part of Hon. Ken’s entourage.