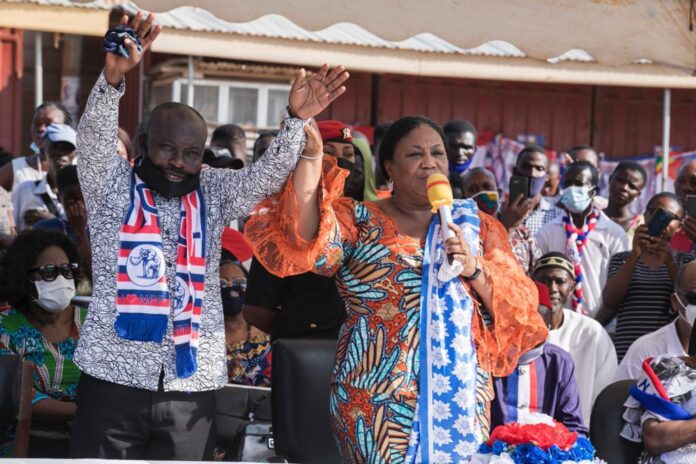 First Lady of the Republic, H.E. Mrs. Rebecca Naa Okaikor Akufo-Addo has urged the electorate in Trobu to vote massively for President Akufo-Addo for one more term to complete the good works he has started with his ‘Ghana Beyond Aid’ agendum.

Mrs. Akufo-Addo made the call when she toured the Trobu constituency in the Greater Accra Region.

Accompanied by the MCE of Ga North Gertrude Ankrah, MP for Trobu Moses Anim, and NPP executives, the First Lady visited the Muus Timber Market at Ofankor, the Ofankor Market and the Pokuase Market and attended a durbar held in her honour at the Ofankor MA School Park.

At a meeting with leaders and executives of the Muus Timber Market, Mrs. Akufo-Addo thanked the traders for their massive endorsement of then candidate Akufo-Addo in the December 2016 elections and appealed to them to vote massively for him in the up-coming December 7th elections.

Chairman of Muus Timber Market, Mr. Kofi Asante, on behalf of the Timber Merchants expressed their elation at the First Lady’s visit and requested her to extend their gratitude to H.E. the President for his assistance following the fire disaster that occurred at the market in December, 2015 as well as the regular de-silting of drains which has significantly ebbed flooding in the area.

He however complained about the consistent disturbance and harassment meted out by officials of the forestry commission at the various barriers when hauling wood to the Muus and appealed to the government to intervene.

Mrs. Akufo-Addo assured the traders their concerns will be referred to the relevant authorities. Additionally, the First Lady reminded them of the construction of a major storm drain to bring an end to the flooding as well as the resumption of works on the construction of the Sawmill road by Resource Access Construction Ltd stating” this government can be trusted to keep its promises “.

The First Lady’s next stop was the Pokuase Market where she met and interacted with the traders.

She appealed to them to look to the many promises the Akufo-Addo government has fulfilled and vote massively for another four year term for the Party in the December 7th elections.

On behalf of the traders, the Pokuase Market Queen, Naa Ayikai Otoo thanked the First Lady for her visit and assured her of massive votes for President Akufo-Addo and the NPP, stating that the many social intervention policies implemented by the Akufo-Addo led government such as the Free SHS, 1 District 1 Factory (1D1F) and NABCO policies have significantly mitigated their economic challenges and created employment for their spouses and children.

They however appealed to the First lady to facilitate their receipt of assistance from the Covid-19 Stimulus package and MASLOC.
Mrs. Akufo-Addo promised to give their concerns her urgent attention and expressed her satisfaction at the government plan to construct a new market complex for the traders, by Hanisa Construction Ltd. which she said will commence very soon.

The First Lady also visited the Ofankor Market to interact with the traders and appealed to them to vote for President Akufo-Addo and the NPP in the general elections of December 7th.

She again noted with satisfaction, the award of a contract to Well Land Construction Limited for the expansion of the road in front of the Ofankor market.

Mrs. Akufo-Addo also joined the NPP MP for Trobu to inspect the on-going construction works of a three storey facility at the Amamorley Health Centre being under taken by Hon. Anim with his share of the MPs Common Fund and made some donation of detergents and other hospital consumables to the facility.

At a grand durbar held in her honour at the Ofankor MA School Park, the First Lady thanked the traditional leaders of Trobu for supporting the administration of President Akufo-Addo in diverse ways, in his service to the country.

She said though the Akufo-Addo led administration has achieved so much in less than four years it was imperative to vote to retain them in office in order not to erode the gains attained so far, but rather consolidate them and assured them of significant enhancement in their social status when they give the Akufo-Addo led government, one more term to do more.

NPP MP for Trobu, Hon. Moses Anim on behalf of his constituents, thanked the First lady for honouring them with her visit.

He said the NPP government has undertaken several development projects in the constituency in the area of road construction and asphalting, construction of schools, modern toilet facilities and installation of street lights among others, and assured his constituents of the NPP’s readiness to continue with their good works to bring economic and social development to the people.
Hon. Moses Anim called on his constituents to look out for the first position on the ballot paper which will be occupied by President Akufo-Addo and the NPP’s parliamentary candidate and vote for them accordingly.