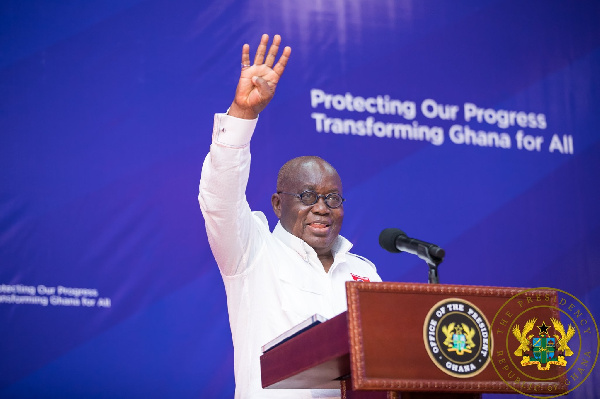 A survey conducted by the Political Science Department of the University of Ghana ahead of the December 7 polls has revealed that 51.7 percent of Ghanaians will vote for President Nana Addo Dankwa Akufo-Addo if the elections were held today.

The survey also noted that some 40.4 percent will vote for the opposition leader, John Dramani Mahama.

A further 1.4 per cent of voters, according to the survey, will vote for the Ghana Union Movement’s Rev. Christian Andrews, also known as Osofo Kyiri Abosom.

The survey, which sampled nearly 12,000 registered voters in 100 swing constituencies across the 16 regions of Ghana, also revealed corruption is not a key determinant for voters in the December 7 elections.

Presenting findings of the survey, Lecturer at the University of Ghana’s Political Science Department Kaakyire Frempong said many of the voters maintain campaign messages will form the basis for their vote.

He pointed out that 51 percent of voters think incumbent New Patriotic Party (NPP) MPs will retain their seats in Parliament while 35 percent of seats are up for grabs.https://6748de718864cf319a3997f401b23896.safeframe.googlesyndication.com/safeframe/1-0-37/html/container.html

Some 13 percent of the voters say MPs are likely to be changed, he said.

“It can be argued that this election is solely contested on policy-based issues. In this election, the economic issues have been framed around tangible and implementable policies. For the Ghanaian voter, their choice is for the candidate who has the capacity to carry through with transformational policies. Therefore, it did not come as a surprise when 62.2 percent of voters said the Free Senior High School programme offers hope to their future aspirations.

“It is interesting from voters’ respondents captured in Table 5 that the banking restructuring exercise that was greeted with cynicism and lamentations by the affected customers and business owners would have no effect on voters’ choices at the polls (0.7%). The voters have confirmed the policy-driven voting paradigm in contemporary elections.

“A majority of Ghanaian voters said they believe in the policies and programs being implemented by the incumbent government ( 61.7%). Only a minority 26.8% expressed lack of faith in the incumbent’s policies and 11.5% declined to make a response,” he said.