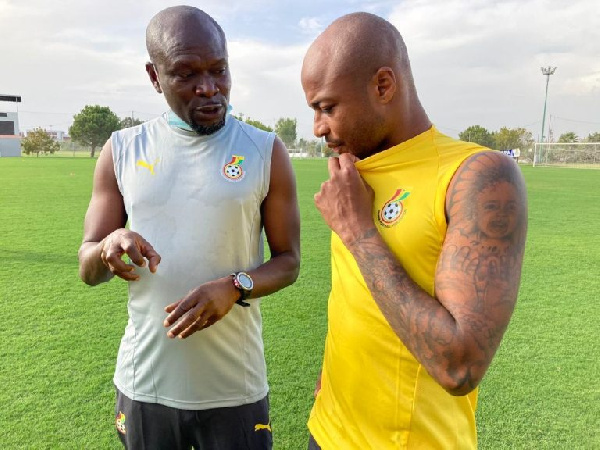 Andre Dede Ayew, the skipper of the Black Stars has assured Ghanaians of victory in their 2021 Africa Cup of Nations qualifier against Sudan.

The Black Stars will hope to maintain their 100% percent start to the qualifiers when they take on the Sudanese at the Cape Coast Stadium later today.

Sudan, a team made up of predominantly locally-based players have had enough time to prepare for the game, unlike the Black Stars whose preparations have been hampered by injuries to key players.

In a pre-match press conference on Wednesday, Andre Ayew said that he is anticipating a difficult contest from the Sudanese.

He said that although Sudan is not ranked among the continent’s top teams, they will not be a walkover for the Black Stars.

He is however confident that the Black Stars will give everything for victory today.

“We have a lot of big teams in Africa now who are good. From the big names, Senegal, Cameroon, Algeria to the lower names like Sudan etc. Sudan is a team that I have faced before, I think we drew here in a very difficult game Kumasi so I know what Sudan is capable of doing. But we are Ghana. And when you wear the Ghana jersey, you have to deliver, especially at home, so we don’t have a choice.”

“We are going to make sure that we get the three points so that that unity and that love between us stay and get even better with time. That is why we want more games, more camping so that we are able to meet each other more and more and create that love between each other”.

In their last game at the Cape Coast Stadium, the Black Stars enjoyed massive support from the residents who filled the stadium and cheered them to victory against South Africa.

But due to the coronavirus pandemic, today’s game will be played behind closed doors and Andrew Ayew has said that it is a big blow to the team.

“Football is a game for the people so football without fans is a big thing because football is made for the fans and we are here to entertain. Even though it’s a very important entertainment, it has objectives ahead but it’s also something that people love. So, the fact that we don’t have fans difficult, especially at home, when I know what we saw here last year”.

“It was something unbelievable, it was great, I loved playing at this stadium. I was looking ahead to playing here again. But we don’t have to get too sad about it. I think everything has its time. This covid-19, I pray to God that very soon it will be out so that everybody can start his/her normal life, not only football but in everything we do. We are ready!”