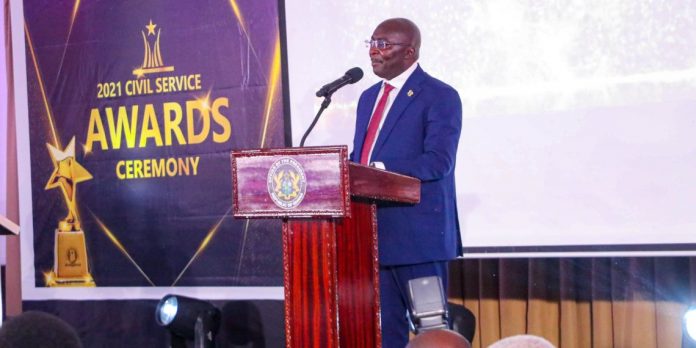 Vice President Mahamudu Bawumia is sticking to his assertion that he would choose the Ghana card over 1,000 interchanges.

Though admitting that his comments caused “a furore”, the Vice President has said his comments were misinterpreted, and he has provided further clarity.

“It wasn’t said cavalierly. There was thinking to that statement, and I want people to think about it,” Dr. Bawumia said at the 2021 Civil Service Awards Night on Friday.

He stressed that “for the first time in our history as a country, we have a unique identity system.”

Dr. Bawumia argued that the Ghana Card is easing pressure on the public purse by, for example, weeding out ghost names.

He noted that 27,000 ghost pensioners were identified on Social Security and National Insurance Trust and 14,000 ghost names on the National Service Scheme.

“A yearly savings that these discoveries have made just in two institutions was GH¢441 million. Over 10 years, you’re talking about over GH¢10 billion.”

“You can be sure that when we go through every institution, you will see that we will be able to eliminate all ghost workers through the Ghana Card,” Dr. Bawumia added.

“Immediately we did that, the number of people that have tax identification numbers has gone up from 4 percent to 85 percent.”