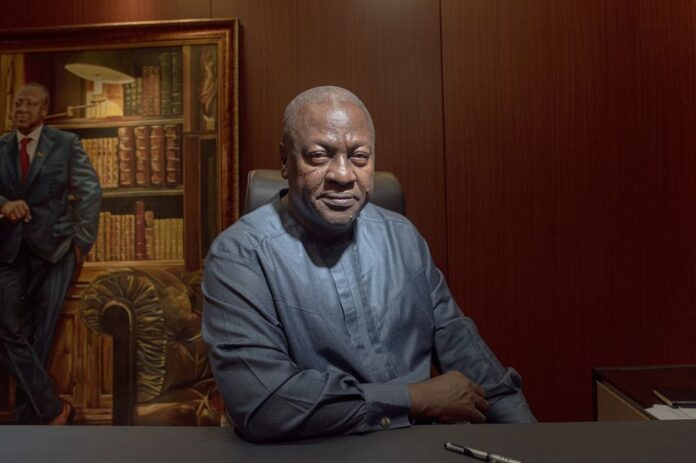 The Eastern Regional Communications Director of the ruling New Patriotic Party, Mr. David Prah has advised the Former President and the flagbearer of the opposition National Democratic Congress (NDC), Mr. John Dramani Mahama to stop the insults on his political opponents and behave like a Statesman so he can justify the huge monthly salaries that are paid to him by the government as an Ex-president

Speaking this morning on Sunyani Based Space Fm, Mr. David Prah expressed his dissatisfaction at the rate at which the Former President John Mahama has been insulting and denigrating his political opponents and Government Officials with most recent one being the insults on the Special Prosecutor Mr. Marthin Amidu.

The Special Prosecutor Lawyer Martin Amidu in a report to the the President, H. E. Nana Addo Dankwa Akufo Addo named the Former President John Mahama as the Government Official 1 in the Airbus Scandal which has been under international investigation.

Mr Prah urged the Former President Mahama to stop all the insults, aspersions and unprintable words on his political opponents.

Mr. David Prah stated that Mr. Mahama is becoming notorious because of his penchant for insults.

Mr. David Prah wondered why Mr. Mahama will only resort to insults instead of discussing policy alternative on political platforms. It takes an empty barrel to make the most noise and that Mr. Mahama is insulting his political opponents because he lacks ideas on governance and has nothing good for Ghanaians. No wonder he ruled Ghana with utmost recklessness and impunity, hence his gross display of incompetence in all sectors of the economy.

Mr. David Prah stated that he is not surprised that some young boys in NDC like Sammy Gyamfi, Kelvin Taylor, Asiedu Nketia, Koku Mawule Nenevor and Kweku’s Boahen have been insulting H. E. Nana Addo Dankwa Akufo Addo, the President of the Republic of Ghana and other NPP Executives, because he (Mr. Mahama’s) doesn’t set a good example for them to emulate.

The Eastern Regional Communications Team Leader has called on Mr. Mahama to stop the insults and educate his NDC Communicators on Intellectual Political Communications and Issues Based Campaign which Ghanaians deserve.

Mr. David Prah appealed to the good people of Ghana to continue to support Nana Akufo led NPP Government to continue to give us good governance in this crucial times of COVID-19.

He reminded us all to continue to follow the necessary protocols such as regular washing of hands with soap under running water, use of alcohol based hand sanitizer, wearing of nose/mouth covers, practicing social/physical distance, staying home if one has nothing needful doing outside, etc. to enable us protect ourselves against the dreaded pandemic.

Mr. David Prah appealed to all well meaning Ghanaians to vote massively for H. E. Nana Addo Dankwa Akufo Addo the President of the Republic of Ghana and all NPP Parliamentary Candidates to do more for Ghanaians.