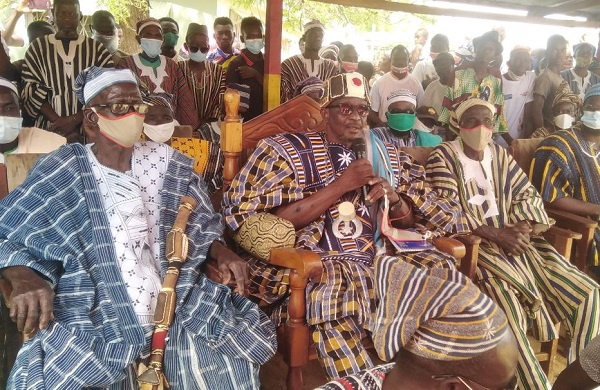 Naba Baba Salifu Alemyaruum Atamale, the Paramount Chief of Bongo, has commended the Nana Addo led administration for completing the Balungu bridge which had been neglected for years.

He said the reconstruction of the bridge was an indication of the seriousness and commitment of President Nana Addo Dankwa Akufo Addo and the New Patriotic Party to improve the lives of his people.

The Chief heaped the praises on the government when he addressed a durbar held in honour of Vice President Dr Mahamudu Bawumia.

Naba Salifu stated that the completion of the bridge and improvement of roads in the area has reduced the suffering of his people and propelled the growth of business.

“I want to thank Nana Addo Dankwa Akufo Addo for providing the several developmental projects in Bongo in the first 4 years. Just to mention a few particularly for the swift intervention by the President to fix the broken bridge on the Bongo – Balungu road that had cut off the movement of people especially during the rains.

The President has shown his commitment by reconstructing the bridge and compacting the road moving from Bongo central to Balungu through to Namoo. This is very tremendous. We need to commend the President for this”.

Naba Salifu expressed the people’s gratitude for the several developmental projects in his Traditional Area, urging the government to execute and roll out more interventions to ameliorate the hardships of his people.

He said, “the people are grateful and your legacy will forever will be remembered.

“…By his grace when you come back to power, remember the people of Bongo. The people will be grateful to have a second district to help in development since the population is fast growing”.