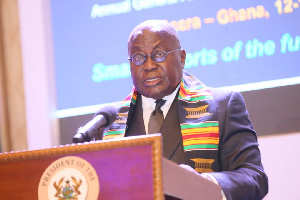 President Nana Addo Dankwa Akufo-Addo says he is hoping that U.S. President-Elect Joe Biden’s tenure as President of the United States of America “will be marked by the delivery of unity, security, progress and prosperity to all Americans”.

The Ghanaian President wrote those words in a congratulatory message he posted on his official social media platforms on Saturday, November 7, when news broke that Joe Biden was projected to win the US Presidential election.

President Akufo-Addo hoped that under the Presidency of Joe Biden and Kamala Harris, the “relations between Ghana and the United States of America will continue to grow from strength to strength, relations which have, over the years, been based on a shared agenda of freedom, development, progress and prosperity.

“God bless the American people, and best wishes for their country’s continued success.”

Joe Biden, according to CNN, AP and BBC in separate projections, has won the US presidential race. He defeated Donald Trump in a fiercely contested election.

Kamala Harris, who was his running mate will be the nation’s first Black and South Asian vice president, and the first woman to hold that office.

Joe Biden was spending the morning with his family at his home in Delaware when he saw the news that he was projected the winner of his native Pennsylvania and will be the 46th president of the United States.