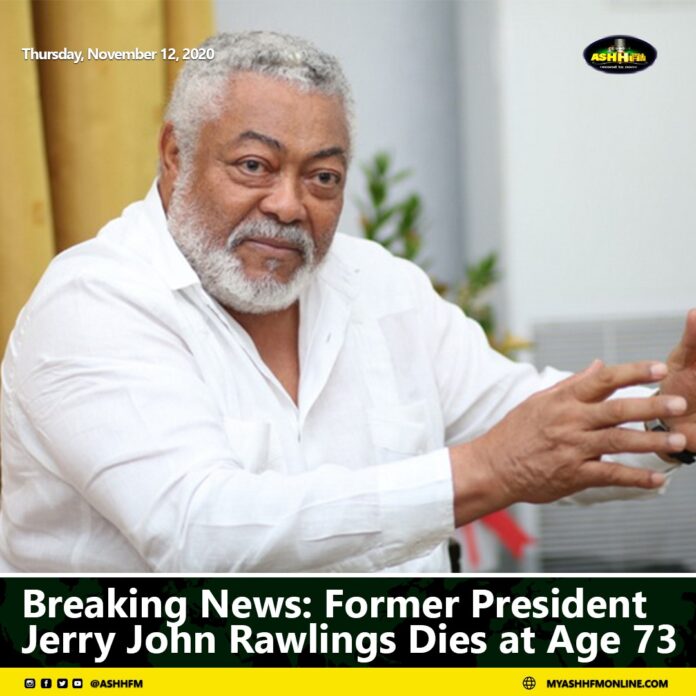 The Chairman of the Volta Regional Council of Elders of the opposition National Democratic Congress (NDC), Dan Kwasi Abodakpi has cautioned members of the party to refrain from politicising the death of their founder, Jerry John Rawlings.

According to him, this is a moment for sober reflection on the achievements, impacts and legacy of the former president who served as president for about 20 years in the country’s political history.

This was made known in a speech read on behalf of Mr Abodakpi at a vigil held in honour of the former president, Sunday November 15, 2020.

His speech read in part “In moving forward, this is a period for sober reflections. Our utterances on the death of H.E. Flt Lt. Jerry John Rawlings, should be decorous, devoid of rancour, and opportunism.”

The former Member of Parliament further stated that mutual respect must thrive in this period as all stakeholders prepare to contribute to the burial arrangement of the Jerry John Rawlings.

He said the funeral arrangements of the former president must be devoid of any attempt to score political points.

“Mutual respect among stakeholders and eschewing of the excessive partisan score is required in planning the funeral activities so as to honour our founder,” his speech further read.

Dan Abodakpi also indicated the NDC’s willingness to fully participate in the pre-burial and burial arrangement of the late founder, Jerry John Rawlings.

According to him, this will form part of the party’s means of honouring the legacy of the former president who passed on in the early hours of Thursday, November 12, 2020.