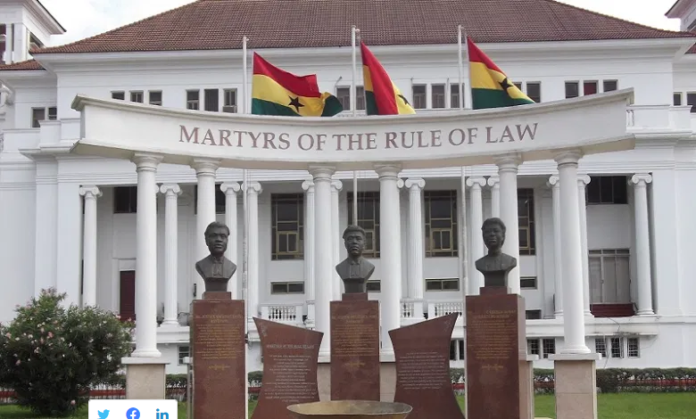 The Supreme Court on Wednesday (20 January 2021) set out five main issues for determination in respect of the petition filed by John Dramani Mahama, the presidential candidate of the opposition National Democratic Congress (NDC) and former president, over the results of Election 2020.

When the seven-member Supreme Court panel presided over by Chief Justice Anin-Yeboah was duly constituted, lawyers for the parties (the petitioner, the Electoral Commission and President Akufo-Addo) indicated that they had filed their memoranda of issues as directed by the court when it sat on Tuesday.

In response to this, the court said it would rise to consider the issues filed, in order to give further directions on the case.

After the recess, the court reconvened and said it had set down five main matters that will engage its attention in adjudicating the former president’s petition.

1. Whether or not the petition discloses any cause of action – that is to say, if there are any legal grounds for the petition;

2. Whether or not the second respondent (Nana Addo Dankwa Akufo-Addo) met the Article 63(3) threshold of the 1992 constitution. This constitutional provision states that a presidential candidate must obtain more than 50% of the total valid votes cast in order to be declared president-elect;

3. Whether or not the second respondent [Nana Akufo-Addo] still met the Article 63(3) threshold of the 1992 constitution with the exclusion or inclusion of the presidential election result from Techiman South;

4. Whether or not the declaration by the first respondent (the Electoral Commission) on 9 December of the presidential election conducted on 7 December violated Article 63(3) of the 1992 constitution; and

5. Whether or not the alleged vote-padding and other errors complained of by the petitioner affected the outcome of the presidential election results of 2020.

The Supreme Court further ruled that, by virtue of the powers conferred on the court by rule 5, sub-rule 4 of CI 99 to dispose of the petition within strict timelines, the petitioner is ordered to file witness statements and exhibits, if any, by noon of Thursday 21 January 2021.

“The first and second respondents shall file their submissions on the preliminary objection raised to the petition by 12 noon on Friday 22 January 2021,” the court further ruled.

After the consequential orders of the court, counsel for the petitioner had cause to complain about the rather stringent timelines as set out by the court in its ruling. However, the court paid no attention to this.

The Supreme Court subsequently ruled that it will reconvene on Tuesday 26 January 2021 to hear the election petition case.