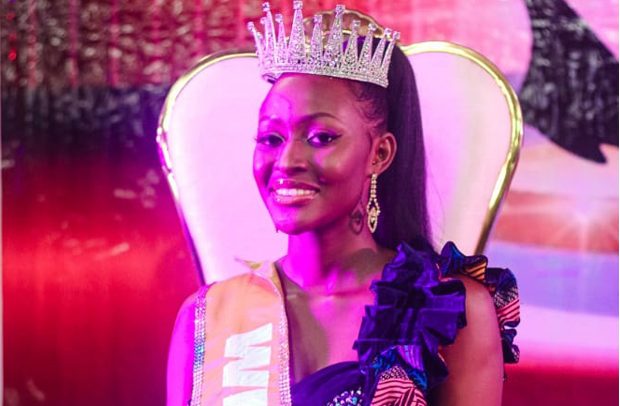 A twenty-One-Year old student of Central University, Fiadzigbe Erica Delali, has been crowned the 2021 Miss UNi International in a hotly contested all-night-long battle between 10 bold and beautiful ladies.

Erica impressed the judges with her elegance and smartness to ease her way to the top, with fierce competition from other contestants.

She beat nine other gorgeous ladies in the race to win the converted title of Miss UNi International at the event which was organized and sponsored by Media Billo.

All ten contestants put up a good show. They all exhibited various talents at the event.

For her prize, Erica took home a special cash prize as well as products from sponsors, free photoshoot with EF Photography, and a trip to Dubai.

22-year-old Catherine Hetcheli-Lawson, a student of Government Secretarial, was declared the 1st runner up while Forgive Adzakkpa, a student of the Central University has adjudged the 2nd runner up respectively.

They took home special cash prizes and souvenirs from sponsors and the organizers.

The grand finale of the beauty pageant which was held at GNAT Hall over the weekend attracted hundreds of people who were entertained by performances by the contestants.

The performance of all ten contestants on stage right from the onset to the end was exhilarating and educative.

They represented their various regions by educating the socially distanced audience in their respective cultural talent shows.

They also took the cheering audience through a project presentation on how they intend to identify and promote unpopular tourist sites in the country and make them attractive.

From the beginning of the show, it was obvious Erica was going to carry the day as she beat nine other beautiful, intelligent and clever young ladies to win the crown.

Most of the applause from the cheering crowd went in her favor as Erica stood out after she performed creditably during the show.

CEO of Media Billo, Mr. Chris Vuyani, assured the Commission of their readiness to support the queens in their quest to contribute their quota in promoting Ghana’s cultural values and tourism as a whole.

Miss UNi International, an inter-university beauty pageant aimed at driving development through tourism and culture, was organized under the auspices of Media Billo in collaboration with the National Commission on Culture Ghana.