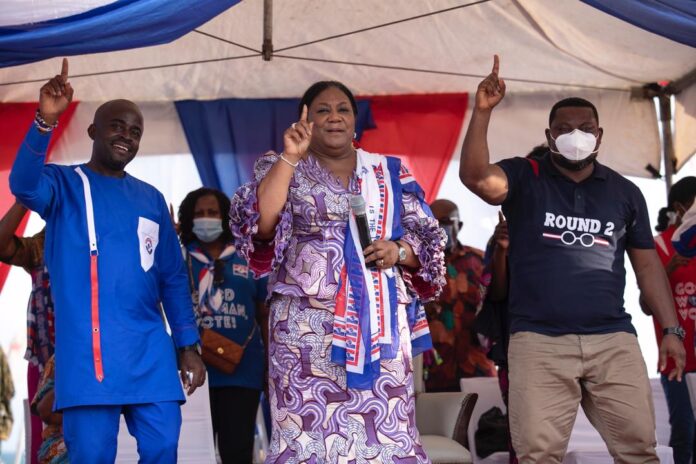 First Lady of the Republic, H.E. Mrs. Rebecca Naa Okaikor Akufo-Addo has urged residents of Ningo Prampram to vote for a parliamentarian from the New Patriotic Party (NPP) to catalyse development projects in the constituency, stating that even though they have been voting for a parliamentarian from the NDC for the past twenty-eight (28) years, they cannot boast of equivalent development in their area.

Mrs. Akufo-Addo said this when she toured and interacted with residents of Ningo Prampram in the Greater Accra Region to canvass votes for President Akufo-Addo and the NPP in the up-coming December 7th general elections.

As part of het tour, the First Lady attended a rally at Dawhenya and Ahwiam all in the Ningo Prampram constituency where she met party faithfuls and introduced the NPP Parliamentary candidate for Ningo Prampram Alexander Martey to the People.

Mrs. Akufo-Addo told the gathering that though the NPP has never won the Ningo parliamentary seat since the inception of the fourth republic, significant projects executed in the constituency, happened under NPP governments.

She said under the government of President Kufuor, the constituency was provided with a police station and police quarters with water supply extended from Sege to Prampram.
Under the Akufo-Addo led NPP administration, Mrs. Akufo-Addo said Ningo Prampram has benefitted from the 1 District 1 Factory (1D1F) initiative which has seen three factories in the constituency, the construction of the largest greenhouse in west Africa a new market, extended electricity and construction of storm drains.

“All these”, she said “has come to Ningo Prampram only when the NPP is in government and even though we have no NPP MP to bring your voice closer to government” and asked the people to imagine the rate of development if they had an NPP MP under an NPP government to advance their concerns.

Member of Parliament for Ablekuma North Hon. Nana Akua Owusu Afriyie who accompanied the First Lady on her tour told the residents to consider the many social intervention policies that have been implemented under NPP governments such as the NHIS under President Kufuor, and Free SHS, 1D1F and the recent reduction and cancellation of electricity and water tariffs respectively under President Akufo-Addo which they have benefitted from, and vote accordingly.
The First lady also paid a courtesy call on the Chief of Dawa and his elders at his palace and thanked them for all their prayers and support for the Akufo-Addo government and pleaded with them to lend their support as the NPP seeks another term in office to do more.

The Chief of Dawa,Nene Tettehwayo Duamor XI welcomed Mrs. Akufo-Addo to the palace and told her he is very happy with the administration of President Akufo-Addo.

He said even though the people of Ningo Prampram including Dawa have never elected an NPP parliamentarian before, there is no doubt that they have benefitted immensely from policies implemented by the government.

He said the Free SHS is a life saver as it had come to address a critical challenge in the constituency and is sure to break the vicious cycle of poverty.

Nene Tettehwayo Duamor Xl assured the First Lady of his people’s unflinching support for the Akufo-Addo led NPP government and their determination to ensure that the NPP parliamentary candidate, Alexander Martey represents them in the next parliament.

Mrs. Akufo-Addo rounded up her tour with a durbar held in her honour at lower Prampram which was graced by the Acting President of Ningo Traditional council and Chief of Ningo Nene Wakah Atiapa III and other traditional leaders.

In his speech to welcome Mrs. Akufo-Addo, Nene Wakah Atiapa III said the time has come for the people of Ningo-Prampram to change their parliamentarian from NDC to NPP.

He said the continuous selection of NDC members to parliament has slowed down development in the constituency due to the lack of urgency on the part of the MP, to lobby development projects to the constituency and said the people of Ningo Prampram will vote massively for the NPP’s Alex Martey to send a clear signal to politicians that they cannot be taken for granted.

The First Lady promised to escalate their request for fishing landing sites at Ahwiam and for the constituency to be divided into two, because of its vastness, to the relevant authorities.

She also reminded them of the Covid-19 threat and advised them to continue adhering to the social distance protocols and wear their masks.