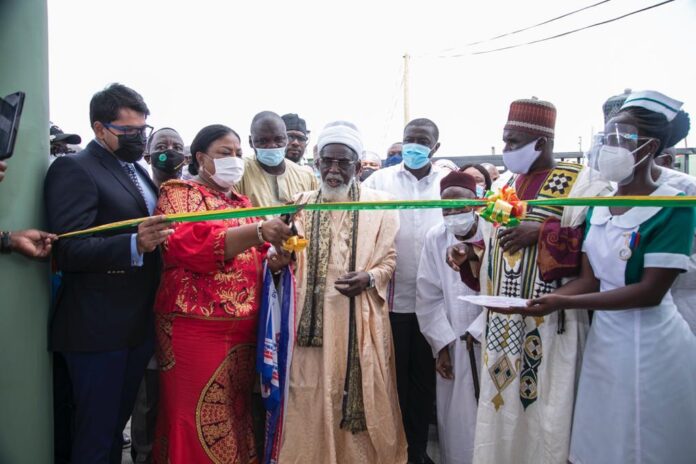 First Lady of the Republic, Mrs. Rebecca Naa Okaikor Akufo-Addo has appealed to the electorate in the Okaikwei Central Constituency of the Greater Accra Region to vote massively for President Akufo-Addo and the NPP based on their achievements in their first term in Office.

Mrs. Akufo-Addo made the comment when she interacted with a cross section of the electorate in Okaikwei Central as part of her tour of the constituency.

She thanked the Chief Imam for his constant prayers and support for her husband H.E. President Akufo-Addo in his political career and asked for his prayers, going into the December 7th elections.

Welcoming her entourage to his residence, Sheikh Sharubutu thanked the First Lady for her visit and assured her of his office’s unflinching support for the NPP government to achieve her objectives.

He said unlike some neighbouring countries who are faced with challenges of pockets of civil instability Ghana is blessed with peace, political stability and religious tolerance all of which are important pillars for development.

Sheikh Sharubutu advised political parties and the citizenry to eschew violence in the up-coming elections, and inculcate the habit of campaigning and voting without rancour.

The First Lady also commissioned a clinic at Fadama constructed by Hon. Patrick Boamah in honour of the National Chief Imam Sheik Sharubutu and donated medical items including diapers, wheel chairs, crutches, antenatal bags, blankets and medical scrubs to the facility.
Mrs. Akufo-Addo later called on the Abeka Mantse, Nii Boi IV at his palace to customarily, seek his permission to interact with his people on election matters.

Nii Boi IV welcomed her to his traditional area and commended her for respecting traditional practices. He gave his blessings to Mrs. Akufo-Addo to campaign in his locality.

The First Lady next met with Market women, car dealers, traders and the physically challenged, at the premises of the Apenkwa Presbyterian Church.
She told them that the good job delivered by President Akufo-Addo in his first term must elicit confidence in the people to vote another term for him.

She said social intervention policies implemented by the Akufo-Addo administration such as the Free SHS has had positive impact on the citizenry nationwide with beneficiaries cutting across political divides. Additionally, she said, disability-friendly policies being implemented by the Akufo-Addo government such as recruitment as toll-booth agents and the increase in the disability fund are all geared at enhancing the wellbeing of every Ghanaian.

Mrs. Akufo-Addo said it is an indisputable fact that since assuming office in 2020, the NPP has worked hard to turn the country’s fortunes around and urged the people to vote massively for the NPP to ensure that gains achieved so far are consolidated.
Member of Parliament for Okaikwei Central, Hon. Patrick Boamah said President Akufo-Addo is a proven loyal supporter of Okaikwei Central, having served as legal counsel for the Abeka Traditional Council and being instrumental in addressing chieftaincy matters that once threatened their peace.

The Hon. MP urged his constituents to vote number one on the ballot paper for both President Akufo-Addo and all NPP Parliamentary candidates for the Party to successfully establish its achievements in government as the new standard in governance.