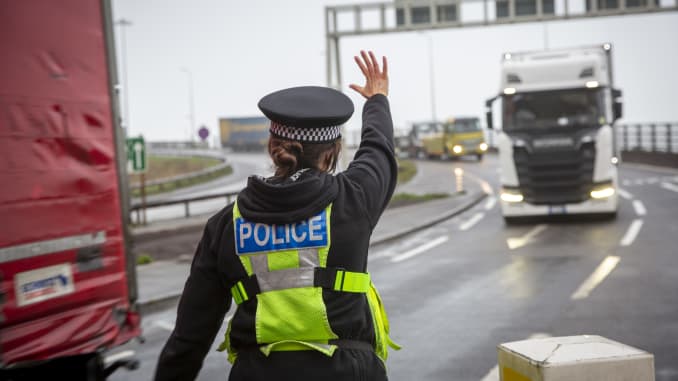 France will reopen its borders to people travelling from the United Kingdom on Wednesday, ending a blockade imposed in response to an apparently more infectious strain of the coronavirus that stopped trade across the Channel and led to concerns about the supply of fresh food.

Much of the world shut its borders to Britain after the authorities revealed a new strain of the virus had been discovered spreading swiftly across southeastern England.

With queues of trucks snaking to the horizon in England and some supermarket shelves stripped just days before Christmas, British Prime Minister Boris Johnson scrambled to get French President Emmanuel Macron to lift a ban on freight trade from Britain.

Late on Tuesday, a deal was reached with Paris to allow French and other EU residents to travel, providing they have a negative COVID-19 test that is less than 72 hours old.

“French nationals, people living in France and those with a legitimate reason will have to be carrying a negative test,” he said.

Later on Tuesday the UK announced it had reached an agreement with France to allow lorry drivers stranded in the UK to leave, providing they take a rapid virus test.

“All lorry drivers, irrespective of nationality, will require a lateral flow test. This can detect the new strain of Covid-19 and provide results in around 30 minutes, rather than the 24 hours required after a PCR test,” said the transport ministry, adding the deal would be reviewed on 31 December.

Britain said it would begin handing out tests at multiple locations on Wednesday but cautioned that the process would take time. The military will also be deployed to help with the tests, the Times newspaper reported.

“We’ll be making sure that tomorrow we’re out there providing tests,” UK Transport Minister Grant Shapps said. “This will take two or three days for things to be cleared.”

Earlier, the European Commission advised that non-essential travel to and from Britain should be discouraged but said that people heading home should be allowed to do so, provided they undergo a COVID-19 test or quarantine for 10 days.

However, border controls are governed by national policy, so each EU country can have its own rules.

Britain said 632 trucks were queuing along the M20 motorway in Kent in southern England, while 2,188 were parked at nearby Manston Airport.

While lorries were still able to cross from France to Britain, they could not return so many European truck drivers were reluctant to travel.