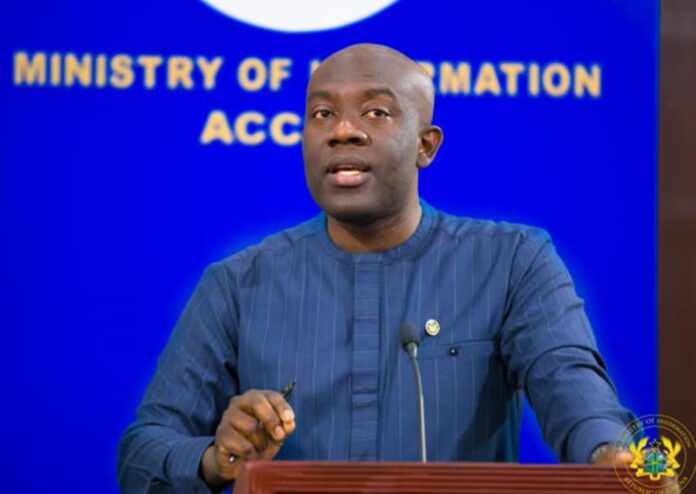 Information Minister Kojo Oppong Nkrumah who doubles as the Member of Parliament for Ofoase-Ayirebi has said the millions of Ghanaians who have benefited from the Free SHS policy know it was started by the Akufo-Addo-led government.

His comment comes on the back of recent claims by the leader of the main opposition National Democratic Congress, John Dramani Mahama that his government envisioned the Free SHS policy back in 2015.

In a series of tweets disputing this claim, Kojo Oppong Nkrumah wrote that contrary to John Mahama’s side of the story, the NPP led by President Nana Addo Dankwa Akufo-Addo began selling the free education programme as far back as 2008.

Adding that Akufo-Addo who at the time saw beyond a political convenience remained consistent in his message to Ghanaians, regarding the Free SHS policy.

Parts of Oppong Nkrumah’s posts read; “the millions of Ghanaians impacted by the Free SHS program do not have short memories. They know it was envisioned and started by Akufo-Addo. They will speak on Dec 7.

“As far back as 2008 Akufo-Addo sold free SHS as a game changer. He has been consistently consistent. In him we have a leader who sees beyond political convenience,” the post further read.

Former President John Mahama who was addressing his supporters in the Upper East Region during a campaign tour said his government launched the Free SHS policy in 2015 and the NPP continued from where they left off.

He said “We started the programme and the NPP came and continued it. Unfortunately, the implementation has been very poor, and so it ended us in double track. I assure you, my countrymen, that within one year, I will cancel the double track,” he said.

While expressing disbelief in his predecessor’s claim, President Nana Akufo-Addo said the NDC’s campaign has fallen in water.

“Mahama’s campaign has fallen in the water. His campaign has landed in confusion, misrepresentations, and outright fabrications. That is the campaign of John Dramani Mahama today in Ghana,” he said during a campaign tour in the Ayawaso West Wuogon constituency.