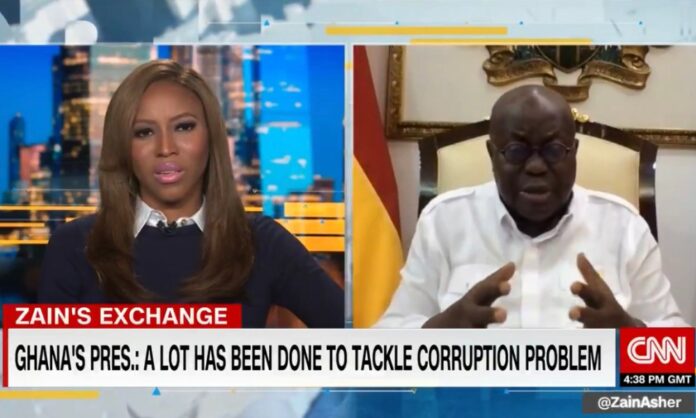 President Akufo-Addo has told CNN in a live interview re-streamed by MyNewsGh.com that his government has improved and is improving Ghana’s international anti-corruption reputation and ranking.

In a no holds barred interview with CNN One World’s Zain Asher late yesterday, President Akufo-Addo spoke about the economy, illegal mining, Twitter establishing its headquarters in Ghana and his government’s fight against corruption.

Zain Asher the host asked him this direct question:

“Are you proud of the way your government has dealt with corruption and what steps specifically have you taken in order to root it out?”

President Akufo-Addo said the word he prefers to be used in the question is not “proud”, but rather “satisfied and effective”.

“The word proud is not a word I will use. Am I satisfied or have we been effective? I will say ‘yes’.” He told CNN.

“A lot has been done and it is reflected in Ghana’s growths in positions or rankings in corruption in the world. We have gone up several notches. We are dealing with this matters at the basic level. For instance the institutions that are there, the anti-corruption institutions of our country when I came to office were very poorly resourced. You can talk all you like about corruption. You can make all the talks or speeches about corruption but if the instrument at your disposal for dealing with it are weak and blunt, you will get no result.” He said.

CNN asked the president how he reconciles his answer with the fact that Mr. Daniel Domelevo has been hounded out of office for exposing corruption.

Responding, President Akufo-Addo said Domelevo attained a compulsory retirement age of 60 years and had to leave per the laws of Ghana’s public service.

“There are laws in our country… The auditor general like me should be the first to recognize the laws in our country. There is a time for retiring prescribed by statute which is not my making. He was 60 years old and no longer supposed to work in the public service. The Auditor General came to 60 years old and had to retire… He was not forced out of office. He left office by the operation of law.” President Akufo-Addo said.