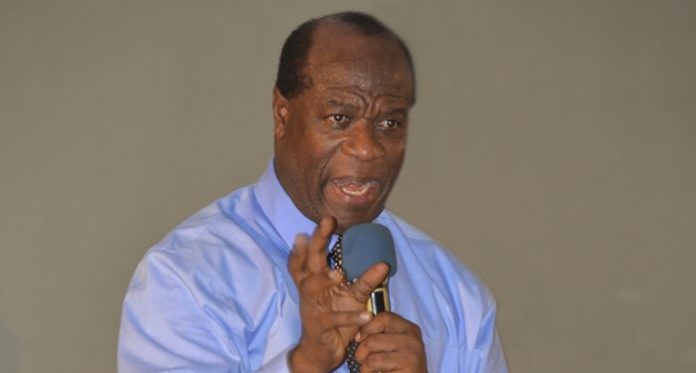 A former General Secretary of the Church of Pentecost, Apostle Dr. Alfred Koduah has called on the public to make relevant inputs for fine-tuning the ‘Promotion of Proper Human Sexual Rights and Ghanaian Family Values’ Bill currently before Parliament.

The bill has generated some widespread conversation, with many expressing varied views about some clauses in the document.

As a result, a number of renowned legal, academic and civil society professionals have filled a memorandum challenging the anti-gay legislation.

In the memorandum, they contend that the bill is an “impermissible invasion of the inviolability of human dignity.”

They further argued that pushing through the bill will be to challenge Ghana’s constitution and democracy.

However, Apostle Dr. Koduah in a Citi News interview insisted that there will be chaos in the country if the bill is not passed.

“Those who have different views should present their memos so that those memos are used to fine-tune the proposed bill so that if there are certain words that have to be toned down, that is done, or maybe the prescribed sentences and the jail terms have to be increased or decreased. These are things we have to look at but to say that we don’t need a law of this nature, I disagree, and we will have a huge problem if we allow LGBTQI+ activities to go on. The whole country will be in a confused state.”

Apostle Dr. Alfred Koduah pleaded with President Akufo-Addo to immediately assent to the bill when it is finally passed in Parliament.

“I want to see the president appending his signature to this bill as soon as it is passed by Parliament because this is so dear to the heart of Ghanaians. If you look at Ghana from the political angle, you will see that the country is polarised which affects everything in this country but with this particular, there is unanimity.”

The Omanhene of the Dormaa Traditional Area who doubles as the President of the Bono Regional House of Chiefs, Osagyefo Oseadeeyo Agyeman Badu II, has also joined the fight against the promotion of LGBTQI+ in Ghana.

Addressing the chiefs and people of Subinkrom in the Dormaa Traditional Area after communal labor, Osagyefo Oseadeeyo Agyeman Badu II condemned people who are in support of LGBTQI activities.

“I am really sad with what I have heard. There are educated people in this country, but it seems they are going backward. Parliament is in the process of enacting a law to prevent a woman from marrying a woman and a man from marrying a man, but there are some people who are against it.”

“I want Parliament to listen to me, Alban Bagbin, Osei Kyei-Mensah-Bonsu, Haruna Iddrisu; they shouldn’t leave the fight to only Sam George and other people. We, the chiefs and pastors in Ghana, are against it. Most Ghanaians are also against it. A woman cannot marry a woman, a man cannot marry a man, how can they give birth? I want to use this opportunity to tell Ghanaians and the whole world, and also tell the whites, that we are not ready to travel to their country. We do not want their visa.”