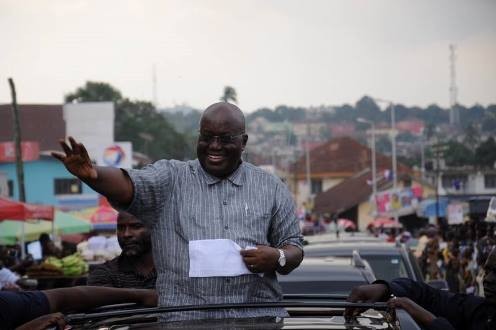 The president has, thus, urged the electorate in the constituency to vote for governing New Patriotic Party’s parliamentary candidate instead of the incumbent MP.

President Akufo-Addo made the appeal when he opened a 450-bed boys’ dormitory block at the Fomena T.I. Ahmadiyya Senior High School in the Ashanti Region.

“You have seen that the independent candidate will not help Fomena, it won’t help Adansi. When it happens that way; it means, in parliament, you won’t have anyone who can negotiate with the government on your behalf, I’m glad you mentioned it”, the president said.

He also revealed that he had attempted to dissuade the MP from going solo but to no avail.

“But I don’t understand him. When I heard he wanted to contest as an independent candidate, three months ago, I called him [Mr Andrew Amoako Asiamah]. He came to me at the Jubilee House and I told him what I had heard. I pleaded with him that being an independent candidate won’t help him because a house that is completely dominated by party candidates, what can you do there. I pleaded with him to put all differences aside till after the elections,” President Akufo-Addo noted.

He explained, however, that his plea fell on deaf ears and, thus, appealed to the people to vote for the NPP’s candidate instead.

However, speaking to Class91.3FM’s Ashanti regional correspondent Elisha Adarkwah, some members of the party indicated that they will still go ahead to vote for the independent candidate despite President Akufo-Addo’s plea.

“Whether he likes it or not, he [Mr Akufo-Addo] wants to be president, the lawyer also wants his MP.”

Another person said: “We prefer the lawyer, we like lawyer Asiamah, he has done everything for us. We would rather vote for NDC.”

“Lawyer has helped us. Then we won’t vote. We wouldn’t have a police station if not for him.”