I Will Beat You -3Music Awards Boss Threatens Shatta Wale 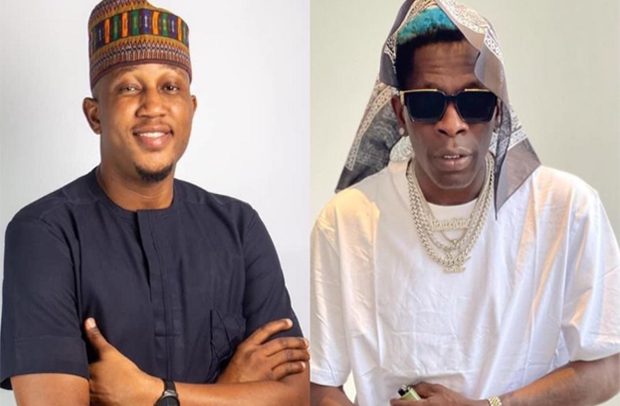 The misunderstanding between dancehall artiste, Shatta Wale and Sadiq Abdulai Abu has taken a new twist with the CEO of 3Music Awards allegedly threatening to physically handle the controversial dancehall act.
“If I see you physically huh…You wale I go (will) beat you,” a voice purported to be that of Sadiq said in leaked audio in circulation.
The audio is a phone conversation that also captured the voices of Shatta Wale and one other person Shatta Wale referred to as Leslie in the recording.
Both Shatta and Sadiq don’t seem to agree on issues lately after Shatta Wale took swipes at #FixTheCountry campaigners to fix themselves.
The most recent one was when Sadiq last week called out Shatta on advice he gave musicians about the kind of music videos they shoot.
Shatta in a post wrote, “Keep shooting music videos like you want to battle Jay Z. You will wake up one day and ask me how I made all this money. And I will tell you this.”
While the post was being discussed on Hitz Fm’s Daybreak morning show, Sadiq who was appointed as one of National Democratic Congress (NDC) spokespersons on Creative Arts ahead of the 2020 General Elections sent a message into the show to disagree with Shatta.
He Wrote, “Wale is always making hollow arguments and running in circles. Who says that today one cant know exactly how much one makes on a song or video. How such narratives are allowed to fester is shocking.”
Shatta who also endorsed President Akufo-Addo ahead of the 2020 General Elections responded with some jabs because he felt insulted by Sadiq.
Shatta went on to discredit Sadiq’s 3music awards alleging that 11 awards he won in 2019 were not because he deserved it but because Sadiq was angry with fellow artists Sarkodie and Stonebwoy.
But reacting to the allegation on Hitz FM on Tuesday, Sadiq said it wasn’t “true.”
“I would never have problems with Stonebwoy or Sarkodie regardless of my commentary on them. But, everybody knows how Shatta Wale is; he has his way of shutting people up to really attack people.
“He has done it to his personal management; it’s obvious where this is going. A typical Shatta Wale at his best, but this is not true,” he said.
He further disclosed that he has not dealt directly with the musician, indicating he only engaged Shatta’s management.
“It’s instructive to know that, since I have known Shatta Wale, I have never dealt with him directly across any forms.
“At any point, I have dealt with Shatta Wale; I have done that through Hulio or Bulldog or to some extent Leslie of Fantasy Dome, so Shatta knows this can never be the chase and but I get it.
“Within the last few days, my taking deference stands against him on a key issue involving industry and Shatta’s life, and as we all know, Shatta is like that; once you disagree with him, he always comes back with something,” he added.
Things however got messy when Shatta was called to join Sadique on the phone to defend his claims.
The two had exchanges on the radio with one making more allegations and the other denying. Shatta disclosed that he called investors of 3music awards to listen to the lies Sadiq was spewing on air.
Shatta however got pissed off after Sadiq denied visiting his home on different occasions. But Sadiq later confirmed he visited Shatta’s house twice but only after the awards and he met the musician when he came to rehearse ahead of the event.
Shatta went on to reveal that the 3Music awards CEO threatened his life and he has voice recordings to back that.
Later the audio recording started circulating on social media On Tuesday.
In the leaked recording, Leslie who is reported to be a common friend to both Shatta and Sadiq attempted to settle their beef by putting them on a conference call. He wanted them to make peace.
However, Shatta insisted that Sadiq apologizes to him. According to him, he didn’t understand why Sadiq went on his page to insult him.
But in his response, Sadiq asked Shatta if he forgot they were doing politics?
Shatta replied in pidgin English saying, “you and who dey do politics? Sadiq you no get sense huh? What I talk you no hear?”
Sadiq at this point started sounding pissed off. “You Dey craze huh, Ebi me you Dey talk to like that ….if I see you physically huh …you Wale I go beat you,” he jabbed who was also throwing tantrums.
Shatta who recently organized boys to beat a road constructor reminded him that he just threatened his life and he liked it that way so he should continue to talk more.