Ignore The Propaganda, Judge Us On What We Have Done – VP Bawumia To Oti Region 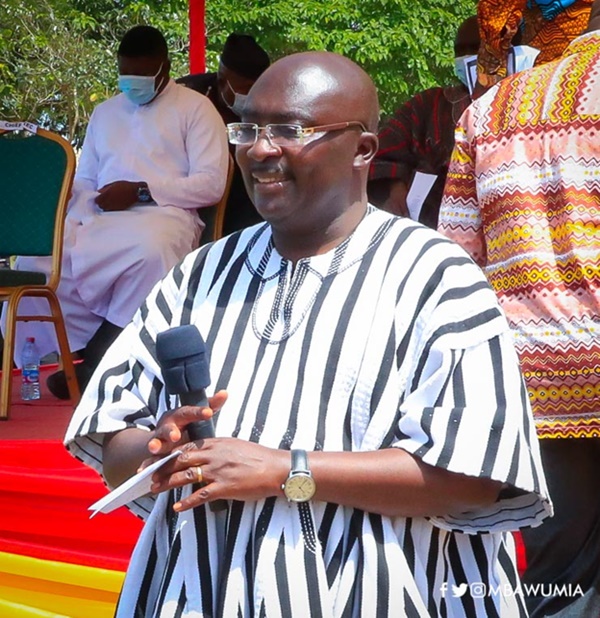 Vice President Dr. Mahamudu Bawumia has urged the people of the Oti Region to critically examine their lives before the advent of the NPP government, and the four years it has been at the helm of affairs, and decide which party really has their welfare at heart.

Contrasting the decades of neglect and under-development under the leadership of NDC MPs and governments to the current situation, Vice President Bawumia challenged the people of the region to reject the oft-repeated lie that the NPP does not care about them.

“Forget the propaganda. Judge us on what we have done and continue to do,” Vice President Bawumia stated at a durbar of the Chiefs and people of Santrokofi, Akpafu, Lolobi and Likpe (SALL) at Likpe Mate on Wednesday, November 4, 2020 at the start of a two-day tour of the Oti Region.

“We are a party that keeps its word. We promised you a new region, and we have delivered. The people of SALL have consistently asked for a new district, and I am reliably informed that the Instrument for the creation of the proposed Guan District will mature in a few days, and your heart’s desire will be met,” Dr Bawumia continued.

“Our opponents are the ones who do not have your welfare at heart. They are the ones who have left you deprived, under-developed and unemployed all of these decades. They have taken you for granted, and only remember you when it is time to vote. Yet they come to you and tell you the NPP does not care about you. Ignore the propaganda and judge for yourselves who really cares about you.

“You are all witnesses to the massive infrastructure and other  developments taking place since Nana Akufo-Addo and the NPP came into office. Our aim is inclusive national development. Everything we have done is enjoyed by everybody. Free SHS, One Constituency One Ambulance, payments for National Health Insurance and many more are enjoyed by everyone, not just a few.

“We in NPP believe we have done a lot to earn your trust. You have seen it yourself. It is time to vote NPP. Give Nana Akufo-Addo and the NPP another four years, and see even more development” the NPP Running mate advised.

Speaking on behalf of the Paramount chiefs of Santrokofi, Akpafu and Lolobi, Nana Soglo Aloh IV, Paramount Chief of Likpe, expressed the appreciation of his people for the listening ear government has given to their concerns over the past four years, and pledged the support and commitment of the people of SALL to national development.

“I recall when we petitioned the President for a new region, and the warm reception we received. I also remember the many developments taking place in our land. We appreciate the efforts of the NPP to make our lives better, and sincerely hope this gratitude will be expressed in votes come December 7,” Nana Aloh stated.

Share
Facebook
Twitter
Pinterest
WhatsApp
Telegram
Previous article30km Anhwiankwanta-Obuasi Road 70% Complete; Obuasi Town Roads To Be Completed In March 2022
Next articleAkufo-Addo Has Fulfilled His Promises To Oti Region, We Will Do Same On Dec 7 – SALL Chiefs