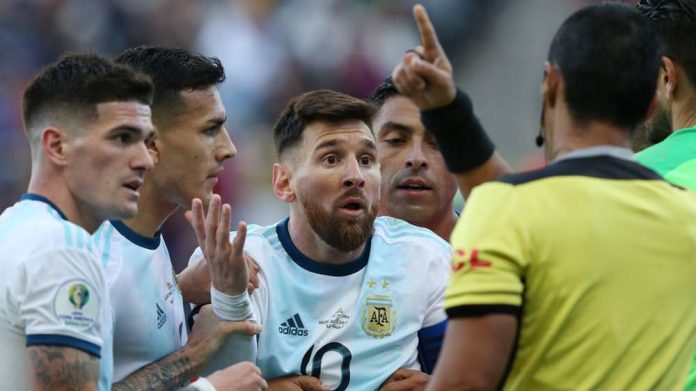 Aside from yet another disappointment in major international competition, in Argentine eyes, the 2019 Copa America will always be remembered as the moment when the usually calm and collected Lionel Messi finally blew his top.

Incensed at what he and many of his compatriots saw as biased refereeing during the Albiceleste’s semi-final defeat at the hands of hosts and eventual winners Brazil, the Barcelona star then saw red after going toe to toe with fearsome Chile enforcer Gary Medel in the third-place play-off.

His subsequent comments to the press earned him a three-month ban from CONMEBOL, as well as widespread praise back home from observers not accustomed to the quiet superstar speaking his mind quite so freely.

“I felt we had been robbed, that we deserved to be in the final and we do not have to be part of this show,” Messi had said after refusing to take part in the medal ceremony following victory over Chile.

“We don’t need to be part of the corruption that we’ve suffered at this tournament.”

Now, two years later, he is back at the scene of his previous fury: and this time, as they say in Hollywood blockbusters, it’s personal.

This Copa America, Leo’s sixth with Argentina, has ended up in Brazil via a succession of last-minute, curious decisions.

The Albiceleste captain had originally expected to play Group A of the competition on home soil, only to see both Argentina and Colombia withdraw from hosting duties less than a month before the action started due to the severity of the Covid epidemic and social unrest respectively.

With few other options on the table, the Copa thus returned to Brazil for the second straight edition.

Tite’s reigning champions will not enjoy the advantage of thousands of fans cheering them on as a result of the pandemic but having won their last nine competitive matches – the latest on Sunday, a 3-0 defeat of a Venezuela side missing 12 players through the virus – they look even more formidable this time round.

What, then, of Argentina’s chances? The Albiceleste, who open their Group A campaign against Chile, go into the Copa off the back of two World Cup qualifying draws in June.

Lionel Scaloni’s men took the lead against both Chile and Colombia – the former via Messi’s penalty past old Barca team-mate Claudio Bravo – before being pegged back and having to settle for a point.

Despite failing to record victory in their only two matches to date in 2021, there are grounds for optimism in the Argentina camp.

At the back, particularly, the emergence of Aston Villa star Emiliano Martinez in goal and Atalanta’s Cristian Romero added new steel and class to a historically problematic area for the nation.

Romero will miss the Chile match through injury but will return later in the tournament, while Martinez recovered from a horrendous clash with Colombia’s Yerry Mina – as fitting a welcome as any to the rough and tumble of South American football – and is set to stay ahead of Franco Armani in the pecking order for Monday’s opener.

It is still a team that is gradually coming together, with plenty of faults to iron out, but despite lacking some of the star power of previous great Argentina sides the 2021 edition is capable of causing a few surprises in Brazil.

Messi, meanwhile, has looked comfortable and relaxed despite the obvious physical toll of jumping back into international football after a hectic club schedule.

Only a succession of top-class saves from Bravo and Colombia No.1 David Ospina stopped him from scoring a hatful in the qualifiers, and he seems enthused by the experience of playing alongside a renewed Argentina team based around the talents of relative newcomers like Leandro Paredes, Rodrigo De Paul and attacking partner Lautaro Martinez, as well as the pair mentioned above.

As for Medel, the rivals showed no lingering resentment from that previous dust-up, smiling and posing for photos together after the match; while ‘Pitbull’ even made off with his erstwhile sparring partner’s shirt.

“Although we have brought on new faces we have been playing together as a team for a while and the team’s playing style is pretty clear,” Messi signalled to reporters on the eve of his team’s Copa debut.

“That is why it is time to strike in this Copa. We know it will be a special, different Copa, because of everything that is going on in the world, but we are ready to compete.”

Monday’s opener marks the start of what will hopefully (from Argentina’s perspective) be a long, tough slog to the trophy. In the next fortnight Scaloni’s men will take the field four times, with tough clashes against Uruguay and Paraguay following in Group A before closing out the opening stage against Bolivia.

While only one team of five will be eliminated from each group, there is still little margin for error. If Argentina slip and fail to finish inside the top two they will likely face the daunting prospect of taking on Brazil in either the quarter or semi-final, an encounter the nation would much rather save for the deciding clash in Rio de Janeiro’s Estadio Maracana.

Any notion that they will depend on Messi’s talents on their way through the tournament, a frequent criticism over the years is quickly dismissed by the man himself.

“The national team has never depended on me,” he fired. “We have always tried to put together a strong team to reach our goals. Little by little we have become strong as a team, we have been working for a while with lots of the same players and the same ideas.

“We have already had one Copa America and many of the players now have that experience, we are still going down a good road.”

While most of the players which reached and lost those three consecutive World Cup and Copa America finals between 2014 and 2016 have either retired, fallen out of favour of been relegated to a more marginal role – as is the case with Angel Di Maria and Sergio Aguero – Messi remains indispensable to Argentina’s plans as he prepares to celebrate his 34th birthday.

Still desperate to win that first international title, he may find that the odds are longer than ever over the next month. But anything is possible with the Barca wizard in the  team – and all of Argentina would love to see him channel that fire which was ignited in 2019 and use it to gain revenge over Brazil this time round