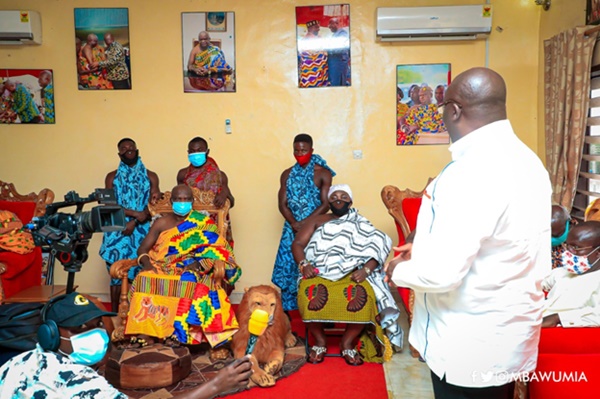 The Paramount Chief of Sefwi Traditional Area, Katakyie Kwesi Bumangamah II has told Vice President Bawumia that the Sefwi Traditional Authority has resolved to back the re-election bid of President Akufo-Addo in appreciation of what his government has done for the people of Sefwi and Western North Region in general.

Speaking during a courtesy call on him in Sefwi Wiawso on Monday, Katakyie Bumangamah II said considering President Akufo-Addo’s fulfillment of his promise to create a region for them and the number of development projects his government has brought to the area, it will be ungrateful on their part not to vote for the NPP in December’s general elections.

“Mr Vice President, all that I want to tell you is that my traditional council and I have resolved to give our thumbs to the NPP for  what this government has done for Sefwi or Western North,’ said Katakyie Bumangamah.

“In fact, the promise for the creation of new region which is in the NPP manifesto (2016) was for Western North. So we will be ungrateful if we don’t honour you; we will come out and vote for Nana and Bawumia.”

The Sefwi Paramount Chief commended President Akufo-Addo for fulfilling his promise to create the region, and for the massive projects in the area.

“It was at this same place I told Nana that for us in Sefwi, we don’t want anything like schools and hospitals.  I told him he should give us a region and I knew why I said that; because when the region comes, hospitals and others wiill follow.”

The traditional ruler noted that others who have had the opportunity to be in government for many could not do what the Akufo-Addo government has done.

“Sometimes you hear some people say somebody has done this, and has done that. From 1992, you have been in power for many years so if you really wanted to create a region, you would’ve done that for us long ago but you couldn’t do it for us.”

“Look at the development projects going on in our area. It beats our imaginations so this year, we will vote massively for you.”

“We promise you that we will never forget what your government has done for Sefwi man,” he assured Dr. Bawumia.

The Vice President commenced a two-day tour of the Western North Region on Monday.