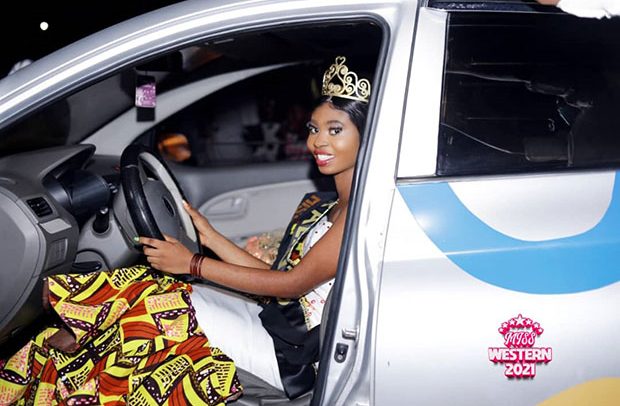 Jemima Essilfie, professionally known as Jemi, who represented the people of Esuaso, a suburb of Tarkwa in the Western Region, has been crowned the winner of Miss Western 2021.

She impressed the judges with her elegance and smartness to ease her way to the top, with fierce competition from the first runner-up a teacher who represented the people of Shama, Emmanuella Atta Affanie (Ella) and second runner-up Illona Addae (Illona) a representative from Tarkwa New Atuabo.

Loretta Adjoa Amissah (Lohtte), also a teacher and representative from Adiembra was adjudged the third runner-up.

Second and third runners-up received GH¢2,000 and GH¢1,000 each and 32 inches television respectively.

The beauty pageant which was held last Saturday at the Grace Angel Auditorium at the Takoradi Library had sixteen (16) delegates battling for the grand prize of the crown, a car and GH¢5,000 cash prize.

In the twelve (12) week-long pageant, the winner, Jemi, had been winning plaudit with her performances. She won the People’s Choice, Most Innovative and Most Versatile awards ten times.

This year’s event started with 16 delegates selected from various parts of the Western Region after auditions in Nzema, Tarkwa and Takoradi. After 12 weeks, 10 out of the 16 delegates made it to the finale.

Award-winning artist, Kofi Kinaata, thrilled music fans at the event with most of his danceable hit songs.

He performed alongside Ewuraba Eesi, Zeekay, and a host of other talented artists at the event.

The CEO of Ex-One Entertainment, organizers of the beauty pageant, Mr. Isaac Mensah disclosed that “this year’s contest has been the most competitive ever since the event came into being because everyone who made it to the finale was a favorite to win.”

“We were able to bring this to a successful end with the help of our judges and solid team that I have,” Mr. Mensah added.

Jemi becomes the third queen of the Miss Western Beauty Pageant, taking over from Miss Edith Eghan who represented the people of Shama last year.