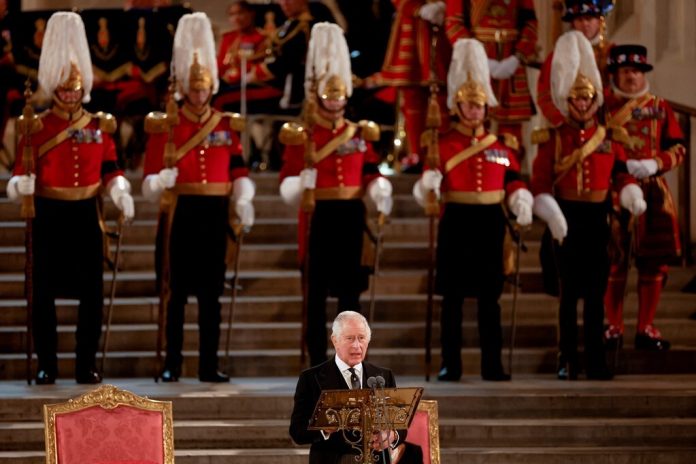 For the first time since he became the monarch, King Charles III is addressing MPs at Westminster Hall.

He is accompanied by Queen Consort, Camilla.

The King says he is “deeply grateful” for the sympathies from MPs and peers after his mother’s death, which he says “touchingly encompass” what the Queen meant to everyone.

He says the Elizabeth Tower, which hosts Big Ben, will mark the passage of the late Queen’s progress from Buckingham Palace to parliament on Wednesday.

Quoting Shakespeare, he says: “As Shakespeare said of the earlier Queen Elizabeth, she was a pattern to all princes living.”

He adds that his mother “set an example of selfless duty” as monarch, vowing to follow her example of commitment to a constitutional government.

Marking the end of the proceedings, a God Save the King is played inside Westminster Hall.

The King and Queen Consort then leave the hall, stopping to speak with the Speakers of both houses.

They will now make their way to Edinburgh as the Queen’s coffin is set to be moved from the Palace of Holyroodhouse to St Giles’ Cathedral.