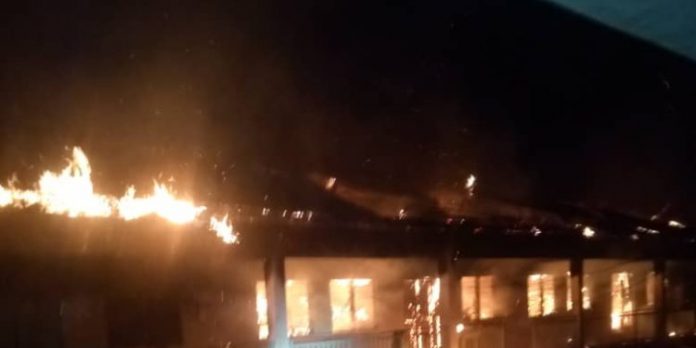 Police at Nyinahin in the Atwima Mponua District of the Ashanti Region, have arrested one person, a laborer, for obstructing firefighters in their attempt to quench a fire at Nyinahin Catholic Senior High School last Friday, October 8, 2021.

The fire destroyed the entire boys’ dormitory block A.

The District Police Commander for the area, DSP James Jerry Amekah told Citi News that the suspect is set to appear before the court on Tuesday, October 12.

The Ashanti Regional Minister, Simon Osei Mensah, while speaking to the media, said he has asked the newly-confirmed District Chief Executive for the area to convene a District Security Council meeting on the matter.

According to him, anyone found culpable must be made to face the law to serve as a deterrent to others.

He however disclosed that intelligence was picked about some final year students fomenting trouble after the final exams and notices were sent to all senior high schools in the region and could not understand by the Nyinahin school failed to act on it.

“In fact, what is surprising is that REGSEC sent messages around that some of the third-year students of the various senior high schools were planning to cause trouble after their final exams, so we should all be on alert and I don’t know this school left themselves loose for this to happen.”

“So I’ve asked the DCE to call an emergency DISEC meeting for the issue to be discussed and the police to also continue with their investigations as well as the fire service.”

The Chief of Nyinahin, Nana Amampine Twum Boateng II, wants the law to deal severely with any final year student of Nyinahin Catholic Senior High School who is found culpable in the suspected arson.

The Chief of Nyinahin, Nana Amampine Twum Boateng II, after assessing the situation, told journalists that he wants all persons involved to be severely dealt with if they are found culpable after investigations.

“How can you rely on leaked questions to pass your exams? Teachers are paid to teach and you as students have to revise your notes and do all that you need to do to pass the exams. You don’t say because you are not happy with the exams, you have to take the law into your own hands.”

“There are laws in the society that govern us. We need to get to the root of this and those who are found culpable must be severely punished,” he said.