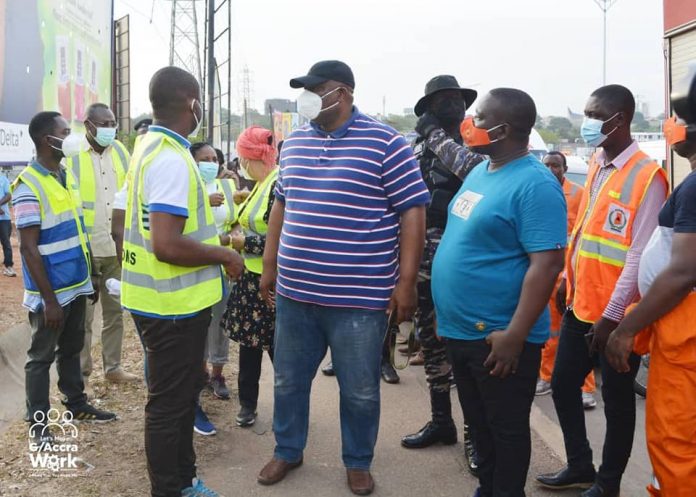 As part of the “Let’s Make Greater Accra Work” agenda, the Greater Accra Regional Minister, Henry Quartey, together with the Municipal Chief Executive and Municipal Coordinating Director of Ayawaso Central, on Tuesday undertook an inspection tour of the municipality to assess some spatial and environmental concerns in the area.
Mr. Quartey who doubles as the Member of Parliament for Ayawaso Central was embarking on a decongestion exercise to rid the vicinity of unwanted and illegal structures in the municipality.

The tour led to the removal and demolishing of some unauthorized structures sited in the area especially close to the Kokomlemle Government school, Alajo storm drain and Malata Market.

Hitting the streets on the “Make Accra work” agenda, the team made a stop at Panama at Kokomlemle, where some structures built along drains were either removed or demolished.
The Regional Minister however expressed his disappointment in the work of the Municipal Environmental and Health Officer (MEHO).

He was alarmed at the volume of filth piled up in drains and on the shoulders of the road, thereby requesting the whereabouts of the Municipal Environmental Health officer, who was nowhere to be found

Amid tears and angry rants, some owners of the illegally constructed structures tried to stop the officials from doing their job but the police intervened to restore order.
SOUND UP
A resident who had diverted wastewater from her residence onto the streets also attracted the displeasure of the regional minister.