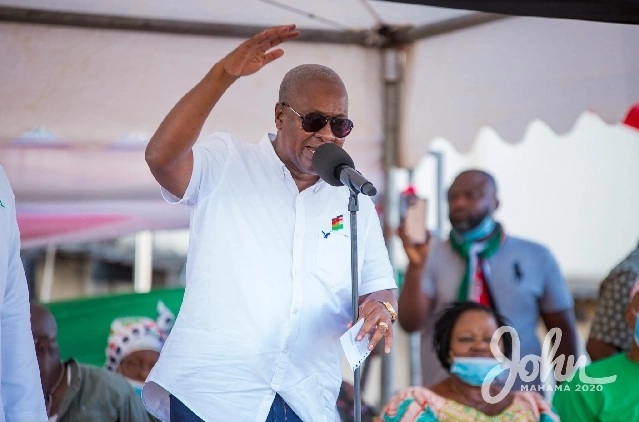 Former President John Dramani Mahama says one of the major tragedies of the NPP-led administration which is intangible is the fact that the country’s institutions are being bastardized.

He said the current government is setting a precedence by closing down media houses they think are doing things they do not like.

The former President who is on a day’s thank you tour to the Upper East Region debunked allegations leveled against him that he has offered the leadership of the fix the country campaigners £85,000 to enable them to demonstrate against the government.

He said fixing the country is not the work of NPP or NDC but a shared responsibility.

Mr. Mahama made the assertion when he met with Members of the Upper East Regional House of Chiefs in Bolgatanga.

Members of the Upper East Regional House of Chiefs have said the former president John Dramani Mahama did not only preach peace when he was the president of the country but was an epitome of peace.

They said his recent handling of the recent elections speaks volumes of the kind of person he is.

President of the Regional House of Chiefs, Chiana Pio Pe Ditundini Adiali Ayagitam, said tension and civil unrest thrives when political leaders by their actions and statements encourage or support it. He said conflicts retards development.

Addressing the chiefs, Former President John Dramani Mahama, described the closure of media houses by the government as unfortunate.

Mr. Mahama said the opposition NDC is ready to play its role and not to obstruct government but to hold government accountable and also collaborate with the administration where they are doing the right thing.

He said the NDC government alone cannot hold the government accountable, hence the need for chiefs, CSOs and Faith-Based Organisations to help keep the government on its toes. Former President Mahama said fixing the country is not the work of NPP or NDC but a shared responsibility.

Mr. Mahama said the NDC government completed phase two of the ongoing expansion works at the Upper East Regional Hospital in Bolgatanga but it came to a standstill when his government lost power.

The former president expressed worry over the decision by the government to abandoned the community day schools, E-blocks that his government started and could not complete before they left office.

He said SHS students are not getting enough contact time with their teachers. Former President Mahama described the votes the NDC obtained in the 2020 general elections in the Upper East Region as unprecedented.