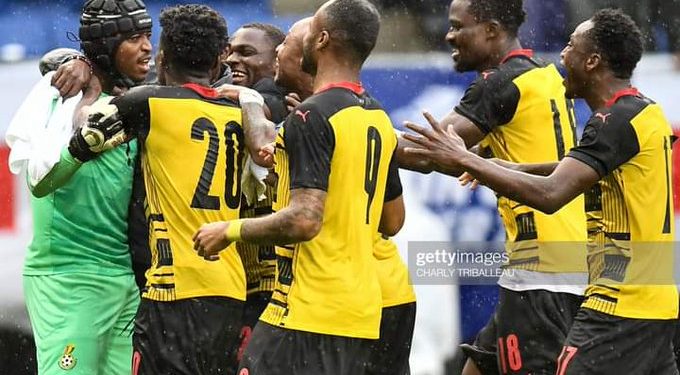 Goalkeeper Manaf Nurudeen was the hero for the Black Stars on Tuesday, saving two penalties as Ghana beat Chile 3-1 in the shootout to secure 3rd place in the Kirin Cup.

Seidu Salifu and Mubarak Wakaso were both sent off in the second half as Otto Addo’s men were reduced to nine players, but they held on for a 0-0 draw to take the game into the penalty shootout.

After Chile scored their opening kick and Jordan Ayew levelled, Manaf Nurudeen saved back-to-back kicks from the Chileans before Gary Medel blasted his kick over the bar to give Ghana the victory.

The win is a slight redemption for the Black Stars who were thrashed 4-1 in their opening game of the competition by hosts Japan.

Addo made five changes to the lineup that lost the opening game, with KAS Eupen goalkeeper, Nurudeen Manaf handed only his second start for the Black Stars.

The first half started and ended slowly for the Black Stars who struggled to create decent chances.

But they emerged for the second half with more urgency – Benjamin Tetteh was denied twice by the upright while the Chile goalkeeper was forced into a great save by captain Andre Ayew.

But when it looked like Ghana were likely to get a goal, a setback emerged, with Seidu Alidu was originally booked for a dangerous challenge, which was upgraded to a straight red card after a VAR review.

But there was still time for Ghana to force a save from the Chilean goalkeeper – Kudus Mohammed’s powerful long-range drive was tipped over the crossbar.

That was the last significant piece of the action as the game headed for the penalty shoot-out to determine who would take the 3rd place prize.

After Jordan Ayew levelled for Ghana, Nurudeen saved from Tomas Alarcon and Ben Brereton Diaz, while Kudus Mohammed and Abdul Fatawu Issahaku both scored for Ghana.

The win was sealed when Gary Medel blasted his kick over the bar.

The Black Stars will be back in action in the September international break when they face Angola in back-to-back AFCON 2023 qualifying games.