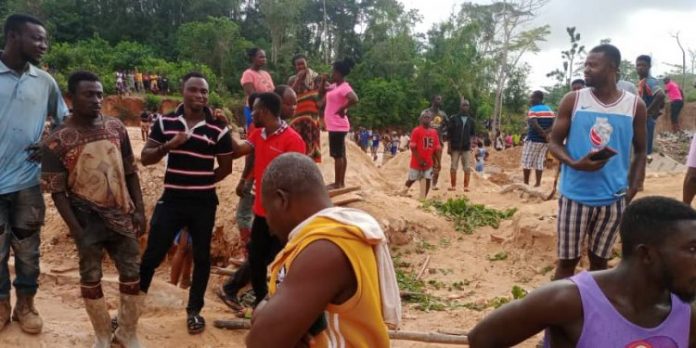 The Minerals Commission has begun investigations into the mining accident that occurred on Wednesday, May 26, 2021, at Denkyira Breman/Brofoyedu in the Upper Denkyira West District of the Central Region.

Dozens of miners are reported trapped in the illegal mining pit.

At least three of the people pulled out of the wreckage have been confirmed dead, including a victim believed to be 10 years old.

Unconfirmed reports suggest that many of the victims are not residents of the community as none of the residents could identify any of the deceased.

The Minerals Commission in a statement indicated that it visited the site around 11:00 a.m on the day of the incident, and that its Inspectorate Division has commenced full investigations into it.

According to the Commission, preliminary investigations indicate that the small-scale miners were working illegally at the site which falls within the prospecting license of Adio-Mabas Ghana Limited.

This incident comes at a time when government has renewed the fight against all forms of illegal small-scale mining in the country.

A similar incident occurred in October 2020 where five persons were reported dead after they were trapped in a mining pit in the same district.

15 others who were also trapped in the cave sustained varied injuries after the incident.

Also, in November 2020, an illegal small-scale mining pit in the outskirts of Ayanfuri collapsed and trapped eight persons between the ages of 24 and 35 years.

A life was lost on May 17, 2021 after an underground mining pit which is part of the concession of Anglogold Ashanti Obuasi Mine, caved in and trapped some workers.