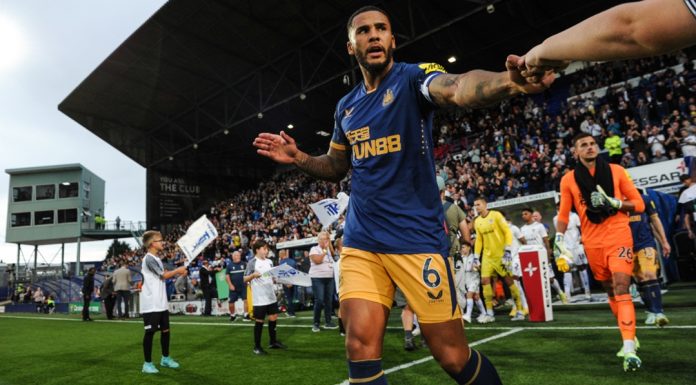 Premier League clubs Newcastle United and Leeds United overcame lower division opposition to secure their places in the League Cup third round with victories on Wednesday.

The big match of the next round pits Premier League champions Manchester City against last season’s League Cup runners-up Chelsea.

Newcastle had to fight back from a goal down to beat fourth tier (League Two) Tranmere Rovers who had taken the lead through a 24th-minute Elliott Nevitt finish.

Jamaal Lascelles brought Eddie Howe’s side level with a close-range drive before the interval and New Zealand striker Chris Wood glanced in a superbly delivered corner from Kieran Trippier to secure a 2-1 win in the 52nd minute.

Leeds also had a scare before running out 3-1 winners over Yorkshire neighbours Barnsley.

A Louis Sinisterra strike from 20 metres put Leeds on their way before Mateusz Klich doubled the advantage from the penalty spot.

A diving header from Mads Andersen gave Barnsley hope and they could have drawn level from the penalty spot but Callum Styles hit the post.

Klich made sure of the win with a curling shot in the 56th minute.

Premier League Brighton & Hove Albion cruised to a 3-0 win at League One Forest Green Rovers to set up a third-round clash with Arsenal.

Manchester United will host Aston Villa in round three and Liverpool entertain League One (third tier) Derby County with the games to be played in early November.