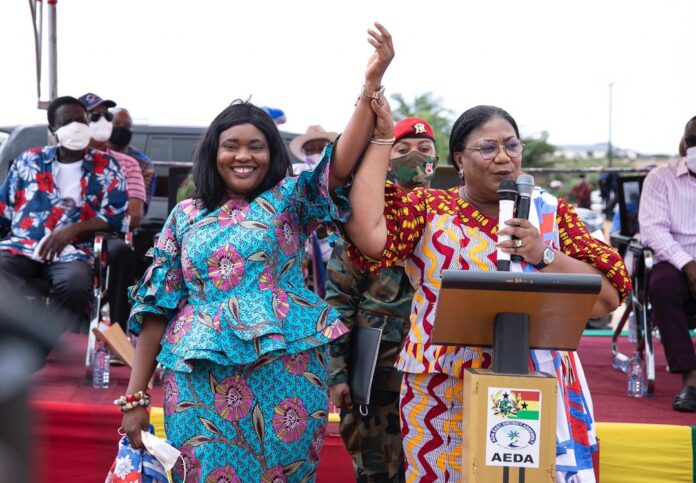 First lady of the Republic, Mrs. Rebecca Naa Okaikor Akufo-Addo has called on residents of the Ada and Sege constituencies in the Greater Accra Region to vote massively for the NPP in both the presidential and parliamentary elections, to witness unprecedented development.

She said voting religiously for a particular political party without witnessing a relative development is indicative of a Party which is complacent with the people’s welfare.

Mrs. Akufo-Addo made the remarks when she toured the Ada and Sege Constituencies, as part of her tour of the Greater Accra Region to canvass for votes for President Akufo-Addo and the NPP in the up-coming Presidential and Parliamentary elections, on December 7th.

At Ada, the First Lady attended a durbar of chiefs and party faithfuls held in her honour at Torgbloku where she urged the residents to vote for a political party with a track record of implementing policies which address their needs.

She said the NPP has the enviable track record of competently implementing social intervention policies which address the core concerns of the people, explaining that good health and education are core ingredients for human development and the NPP has the record of implementing the National Health Insurance Scheme (NHIS) under President Kufuor and the Free SHS under President Akufo-Addo “This is what should inform you in deciding on who to vote for on December 7th, she said.

Mrs. Akufo-Addo introduced the NPP parliamentary candidate for Ada Madam Sarah Pobee who is also DCE for Ada East to the Chiefs and people, and appealed for their support in votes so she represents them in the next parliament.

At Sege, Mrs. Akufo-Addo met with fishmongers and womenfolk at the Goi School Park to interact with them and ascertain how government can facilitate the growth of their businesses. She also inspected on-going works on Phase 2 of the Sege market project and urged them to vote for President Akufo-Addo and the NPP parliamentary candidate for Sege, Madam Eunice Lasi to ensure completion of all on-going projects as well as execution of new ones.

She said the government of President Akufo-Addo is on the path of changing the country and with an NPP representative in parliament, the people of Sege will benefit immensely from this transformation.

“We have completed constructing an ambulance bay, the Astech school block, phase 1 of the Sege Market and already working on phase 2 which will come with a nursery for your children”, Mrs. Akufo-Addo said to a thunderous applause by the fishmongers and traders.

The First lady said beyond voting for a woman who will be more sensitive to their social and economic woes and so will advocate to pass laws in that direction, voting for an NPP parliamentarian will also mean voting for someone who shares the development aspirations of President Akufo-Addo and is willing and able to join him work to make that vision a reality.

She emphasized that though the Akufo-Addo led NPP government will not be discriminatory in extending development projects to all constituencies in the country, it is trite knowledge that voting for a parliamentary candidate who is a member of the governing Party, especially when that Party is the NPP, always inures to the benefit of the people.

The NPP Parliamentary candidate for Sege, Madam Eunice Lasi said the Free SHS policy has brought great relief to the people of Sege and has also caused a significant increase in enrolment of girls in school as the challenge of selecting one among many in a family to go to school, which often favoured the males, has ended.

Mrs. Akufo-Addo promised to address some needs raised by the traders and townsfolk including road construction, expeditious completion of phase 2 of the Sege market and its auxiliary facilities, as well as the provision of soft loans to expand their businesses.

The First Lady was accompanied on her tour by the CEO of Coastal Development Authority, Mr. Jerry Shaibu Ahmed, Greater Accra Regional Chairman of the NPP, Mr. Divine Otoo Agorhom and other government and party officials.