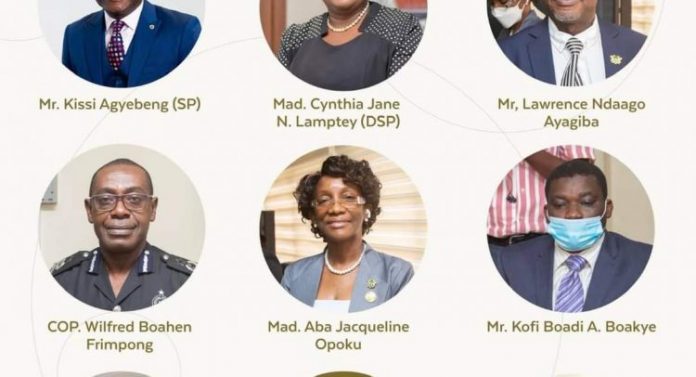 The Attorney-General and Minister for Justice, Godfred Yeboah Dame, on Tuesday, June 21, 2022, inaugurated the second Governing body of the Office of the Special Prosecutor (OSP) in line with section 5 of the OSP Act (Act 959).

Members of the board are representatives from the Ghana Police Service, the Audit Service, Economic and Organised Crime Office (EOCO), the Commission on Human Rights and Administrative Justice( CHRAJ), the Financial Intelligence Centre (FIC), the Ministry of National Security and one person who is a female representing the Anti-Corruption Civil Society Organisations.

The National Security Representative was, however, absent at Tuesday’s swearing-in ceremony.

The new governing board members have been tasked to; formulate policies necessary for the achievement of the object of the office; ensure the proper and effective performance of the functions of the office; advise the Special Prosecutor on the recruitment and selection of the Secretary and other senior staff of the Office.

Section 6(2) of Act 959 provides that the Board shall not interfere in the day-to-day functions of the Office.

According to the Attorney General, the Special Prosecutor, should utilise five legal mechanisms in his establishing law in investigating, prosecuting and recovering proceeds of corruption:
“A proper exercise of these powers”, according to the Attorney General, “will ensure that the Office becomes a potent instrument of the State in its effort to root out corruption. The phenomenon of the creation of shell companies for the laundering and concealment of the proceeds of crime will be drastically reduced by the exercise of your powers under Act 959 just alluded to.”