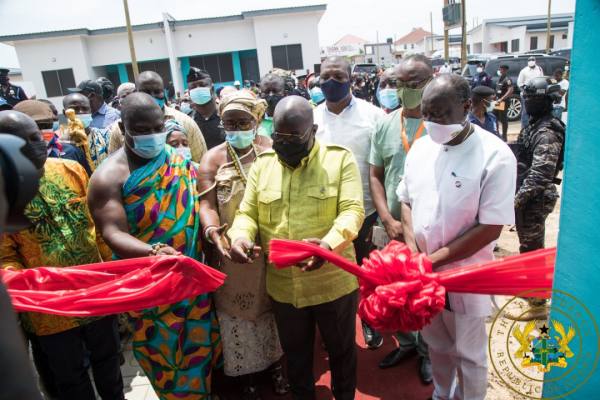 The President of the Republic, Nana Addo Dankwa Akufo-Addo, has commissioned two hundred and four (204) housing units, constructed in nine (9) months, under the National Mortgage and Housing Finance Initiative.

Commissioning the housing units on Monday, 26th October 2020, on day 2 of his tour of Greater Accra, President Akufo-Addo described the completion of the 204 housing units as “one of the successes achieved during the two (2) year pilot phase of the National Housing and Mortgage Fund (NHMF).”

The project involves the construction of two hundred and four (204) houses, comprising one (1), two (2) standard and expandable unit bedrooms for public sector workers.  GCB Bank Limited will be underwriting the mortgages to public sector at rates far below market rates, and with longer tenor.

In his remarks, the President stated that the country has a huge housing deficit, which has risen over the years, especially in the urban areas.  “Despite an annual supply of about forty thousand (40,000) housing units, we are unable to meet the annual demand of some seventy-thousand (70,000) homes each year, and the housing deficit has now exceeded two million housing units,” he said.

The demand-side challenges of home ownership, President Akufo-Addo explained, include the lack of adequate long-term funding, high cost of capital and high non performing mortgage loans. In addition to restrictive banking regulations, high interest rates on mortgages have reduced the appetite for mortgage financing.  Desirous of fixing the demand–side challenges of home ownership, Government, in 2018, approved the National Mortgage and Housing Finance Initiative, with the aim of stimulating the local currency mortgage market.

“In operationalizing the initiative, the National Housing and Mortgage Fund (NHMF) was set up to pilot two schemes – the National Mortgage Scheme (NMS) and the Affordable Housing REIT’s (rent-to- own) scheme.

The Fund is now working with players in the housing market, i.e. home buyers, developers and banks, to address the issues and create an enabling environment for a thriving housing market,” the President said.

This intervention has indeed reduced mortgage rates by over sixty percent (60%), compared to the average market rate of twenty-eight (28%).

The Affordable Housing REITs is promoting the rent-to-own scheme with only monthly rent payments and, after a period, the occupant has the option to own it. On the other hand, the rent-to-own scheme will eliminate the burdened two (2)-year rent advance system, and designed to give low income workers the opportunity to rent and eventually own homes, with the focus on apartments and inner-city rehabilitation.

“Government will, therefore, use this framework, the Affordable Housing REITs, to revive the affordable housing concept, and complete many of the abandoned housing units across the country started by the 2nd President of the 4th Republic, His Excellency John Agyekum Kufour.

The Affordable REITs will become the off-taker of the properties for the rent-to-own scheme,” President Akufo-Addo said. President Akufo-Addo assured that the Ministry of Finance and Ministry of Works and Housing will also partner to speed up work on delivery of houses under the National Mortgage Scheme and the Affordable Housing REITs Scheme, to promote investors interested in developing affordable houses in the country.

He indicated further that the Affordable Housing REITs is working with Tema Development Company to provide off-take for the renovated Blocks at the TDC affordable housing enclave, Community, 26 through the rent-to-own scheme to Ghanaians.

The REITs is also working with Adom City Estates to provide off-take of more than 100 affordable housing units through the rent-to-own scheme. “I must also mention that the National Mortgage Scheme (NMS) is working with Republic Bank Limited to procure twenty-one (21) blocks or one hundred and fifty-units of the renovated Asokore Mampong Affordable Houses developed by SSNIT for the Ghana Medical Association (GMA),” he added.

With four more for Nana and the New Patriotic Party, President Akufo-Addo assured that “Government, from 2021, will use this framework to support more private developers to build model communities across the country and expand the schemes to cover all Ghanaians.”