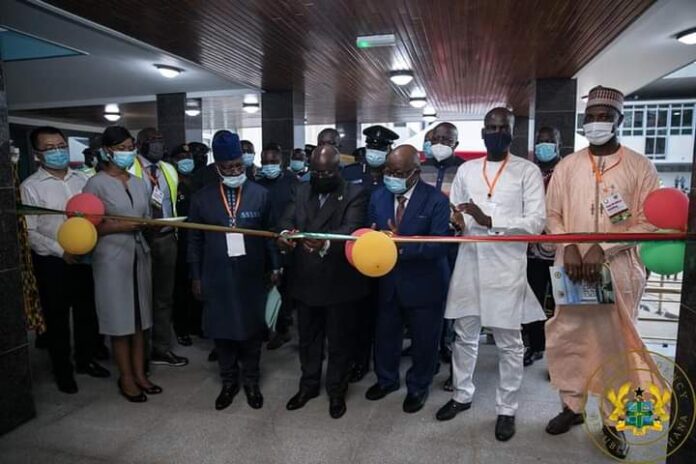 The President of the Republic, Nana Addo Dankwa Akufo-Addo, has commissioned the newly constructed “Job 600” Annex building, the Chamber support services block, a drivers’ waiting centre, and a visitor’s waiting centre, for Parliament.

The buildings, constructed under the Parliament House Physical Infrastructure Enhancement Project, forms part of measures aimed at addressing, comprehensively, the gaps in infrastructure faced by Parliament over the years.

Commissioning the Project, President Akufo-Addo applauded the Rt. Hon. Speaker, Prof. Aaron Mike Oquayethe Leadership of Parliament, and the Parliamentary Service Board, for ensuring that these projects, whose sod-cutting took place on 22nd February 2018, were completed within schedule.

Delivering his remarks, the President noted that if Ghana is to be successful in deepening her democracy, there must be a true separation of powers between the various arms of government.

This, he stressed, requires that the adequate resourcing of Parliament with the requisite infrastructure and logistics to help it function effectively.

“That is why the Government of Nana Akufo-Addo, since its assumption of office on 7th January 2017, has increased cumulatively the budgetary allocation to the House by 56.6%, and has committed itself to supporting the Parliamentary Service Board to initiate and implement various projects necessary for the efficient work of the Legislature,” the President said.

Indeed, after the refurbishment, in 2015, of the State House Tower Block, popularly referred to as “Job 600” building, not all Members of Parliament could be accommodated in the building.

“To remedy the situation for the unlucky MPs, and also to meet other physical infrastructural needs of the House, Government took up the challenge to provide the requisite finances to support Parliament in undertaking the Physical Infrastructure Enhancement Project,” he said.

President Akufo-Addo continued, “You can, therefore, understand my delight at being here today to inaugurate these important office facilities, which would provide MPs and staff of the Parliamentary Service with adequate, well-equipped work spaces to enable them perform their functions in a conducive environment.”

The President urged the Parliamentary Service Board to put in place the requisite mechanisms, including the necessary facility management arrangements, to ensure the regular maintenance of these newly constructed buildings, as well as all existing edifices.

About building
The Job 600 Annex is a six (6) storey building with fifty-four (54) offices (9 on each floor), thirty-six (36) offices for research assistants, nine (9) kitchenettes, nine (9) washrooms- one per floor for males, females and persons with disability, two (2) convenience shops, one (1) financial facility, a 150 seater multi-purpose hall with a media room, eleven (11) offices for supporting staff and archives at the basement.

The Drivers’ Waiting Centre consists of one (1) office, a reception area, 60 to100-seater area for drivers, an eating area, a snack bar, and a washroom (male/female).

The Visitors’ Waiting Centre also consists of one office, a reception area, 250-seater waiting area, an eating area, a snack bar and a washroom (male/female).