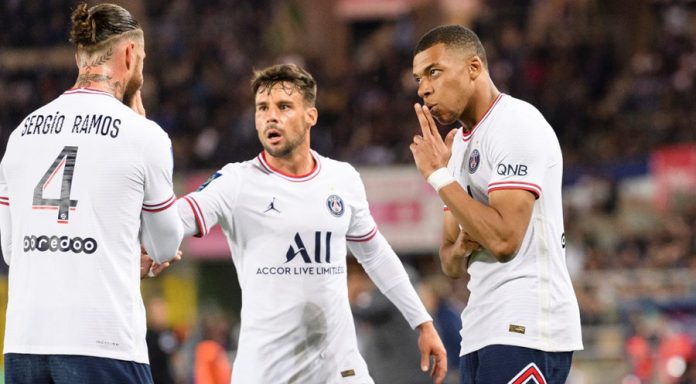 Ligue 1 leaders Paris Saint-Germain welcome Nice to the Parc des Princes on Saturday as coach Christophe Galtier faces his former club for the first time since moving to the capital.

PSG failed to score in three meetings with Nice last season, including during their surprise French Cup exit, but have been finding the net for fun this term.

The front three of Kylian Mbappe, Neymar and Lionel Messi have 27 goals between them already this campaign and all of the trio also scored for their countries during the recent international break.

Despite a flying start to their Ligue 1 title defence with seven wins and one draw, Galtier’s men only boast a two-point lead over rivals Marseille.

The southerners could take top spot on Friday when they visit Angers.

PSG will be hoping for a routine victory ahead of their top-of-the-table Group H clash at Benfica in the Champions League on Wednesday.

Nice, backed by British billionaire Jim Ratcliffe, were expecting to challenge for the top three this season after a transfer window which saw Kasper Schmeichel, Aaron Ramsey and Ross Barkley among the players to arrive at the Allianz Riviera.

But under new coach Lucien Favre, in his second spell in charge, the ambitious club have mustered just two wins in eight matches and sit only two points clear of the relegation zone.

OM, without a French league title since 2010, have given themselves an outside chance of stunning PSG and going one better than last season’s runner-up finish.

Elsewhere this weekend, third-placed Lorient bid for a fifth successive win when they host Lille on Sunday.

Lens will put their unbeaten record on the line against a Lyon side looking to avoid a fourth straight defeat following a strong start to the season.

Polish goalkeeper Bulka was given the nod for Nice’s last Ligue 1 game before the international break, a 1-0 loss to Angers, in place of summer signing Schmeichel.

The best moment of Bulka’s career to date came against Saturday’s opponents PSG in last season’s French Cup while on loan from the capital giants.

He saved two penalties in a shoot-out to help dump out the holders in the last 16.

9 – seconds it took for Jean-Clair Todibo to be sent off during Nice’s loss to Angers last time out.

34 – number of red cards dished out in Ligue 1 so far this season — 14 more than in La Liga and 30 more than in the Premier League.

35 – goals scored by PSG in 11 games in all competitions this season.