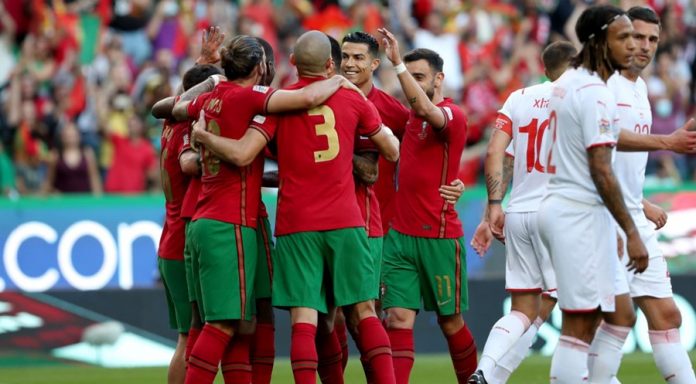 Cristiano Ronaldo marshalled Portugal past Switzerland in the Nations League on Sunday as Gavi made history becoming Spain’s youngest ever scorer.

Ronaldo scored two goals in four first half minutes and had a third ruled offside by VAR as Portugal crushed Switzerland 4-0 in Lisbon.

The Manchester United striker had set up William Carvalho for the opener with Joao Cancelo completing the rout to fire Portugal to the top of League A, Group 2, on goal difference from the Czech Republic.

In Prague, Jakub Pesek put the hosts in front before Gavi levelled with a low curling left-footer at the record age of 17 years and 304 days just before halftime.

Jan Kuchta had the Czechs back in control with a delicate chip but Athletic Bilbao defender Inigo Martinez headed home in the final minute to salvage a 2-2 draw.

“It is wonderful to be able to say that we are disappointed to lose points against Spain,” said Czech captain Tomas Soucek.

“We showed heart and great teamwork. If somebody told us that we would have four points before these two games, we would have taken it. We have started well and look forward to the next games.”

“We came away with a point, but the aim was to win. When you don’t win, when you have great difficulties, you come away disappointed.”

Spain reached the final of last year’s Nations League, beating European champions Italy in the semis before losing to France, and they enjoyed a relatively smooth qualification for the World Cup.

But they are now on the back foot in this competition and after their opening 1-1 stalemate with Portugal on Thursday are placed third in the group, two points adrift.

And Georgia are in command at the top of League C Group 4 after dishing out a 5-2 drubbing to Bulgaria while Manchester City’s new headline signing Erling Haaland produced the goals in Norway’s 2-1 win in Sweden.

The Norwegians top League B, Group 4 after two wins from Serbia, 4-1 winners over Slovenia.

On Monday world champions France have their second run out in Split against Croatia with Kylian Mbappe one of several kep components of Didier Deschamps’ team to skip eve-of-match training.

The Paris Saint-Germain forward came off with a left knee niggle at half-time of Friday’s 2-1 loss by last year’s Nations League winners to Denmark at the Stade de France.

“We’ll see about tomorrow (Monday),” Deschamps said on Mbappe’s prospects of turning out against the team Les Bleus defeated to win the 2018 World Cup in Moscow.

Number two keeper Mike Maignan will earn his third call-up in place of Hugo Lloris with Presnel Kimpembe taking the captain’s armband in this League A, Group 1 tie.