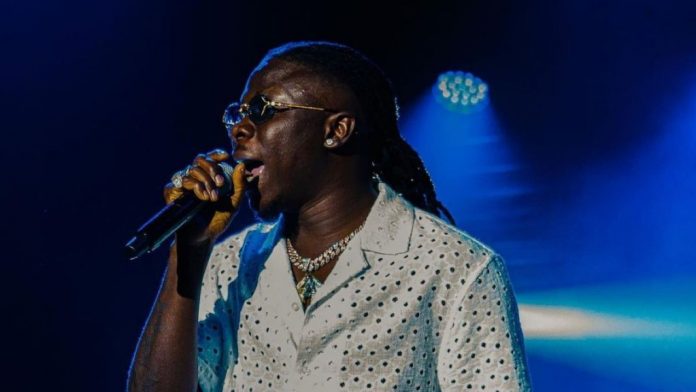 TECNO, Africa’s most preferred smartphone brand, on Saturday (June 18) launched the long-awaited addition to the Camon smartphone series in Ghana. The launch follows an already successful global launch in New York City on June 14 with the brand’s ambassador, Stonebwoy, in attendance.

The new device, the Camon 19 series, comes with an array of enhanced features that bring a whole new dimension to the smartphone experience. One of its exciting new features includes a 64MP bright night portrait photography technology and the industry’s slimmest 0.98mm bezel.

Dubbed the ‘Camon 19 Launch Event,, the night was climaxed with a noteworthy performance from DefJam’s signed artist and the brand’s ambassador. The multiple award-winning musician wowed the Grand Arena of the Accra International Conference Centre with an energetic and dynamic medley of his songs with the BHIM Band.

Stonebwoy opened his set with a calm rendition of “Le Gba Gbe”—a motivational and liberative standout from his 2020 chart-topping and award-winning album, “Anloga Junction.” The set sought to tackle issues plaguing many Ghanaians as he performed “Tomorrow”, “Journey”, “Run Go”, “Greedy Men” and other notable conscious and political songs from his catalogue.

In between, he took a break to address important concerns that are making the country “unbearable” for citizens, and he urged the government to develop policies that will “relieve the system’s pressure.” He did, however, acknowledge the country’s leadership effort in improving the economy so far.

Halfway through his performance, Stonebwoy switched up the energy in the auditorium with some Afro-fusion songs. He delivered a pleasantly invigorating performance of the 2020 Davido-assisted songs “Activate”, “Everlasting”, “Sobolo”, “Nominate” (featuring renowned American singer Keri Hilson), “Putuu Freestyle” and the latest song of the summer, “Therapy”.

The standout moment of the evening came when he was joined on stage by his two adorable children. The audience was entertained by their rendition of “Therapy.” Stonebwoy’s performance on the night drew a standing ovation from the entire audience.

Tecno Mobile announced on Thursday (May 5) that it had renewed its ambassadorial deal with Stonebwoy. The news was confirmed during a press conference held in Accra by Uninversal Music Group and DefJam Records, which announced the Ghanaian musician as the latest African artist to be signed to the global record label. He was first announced as the brand’s ambassador in 2020, when the phone company released its Camon 16 series. It was renewed in 2021, just in time for the company’s Phantom X series to premiere.

Coming off an impressive performance at the Front/Back Garden in Accra, afro-fusion artiste, Camidoh, was the night’s guest performer.

He gave an enthralling performance of his chart-topping star-studded single “SUGARCANE” remix and an upbeat rendition of his Kwesi Arthur-assisted wedding themed song “Dance With Me”. He also delivered a legion of songs from his catalogue, notably “For My Lover” (featuring Darko Vibes), “Hot Persuit”, and “Available”.

TECNO CAMON 19 series impressed the attendees by its brilliant portrait photography in challenging low-light and nighttime conditions as well as the industry leading design, with its elegant, fashion-forward design which won iF Design Award 2022 in April and several industry-first technologies like the new technology RGBW camera sensor + glass which is co-developed with Samsung.