Teachers in Tamale boycott class after assault on headmaster 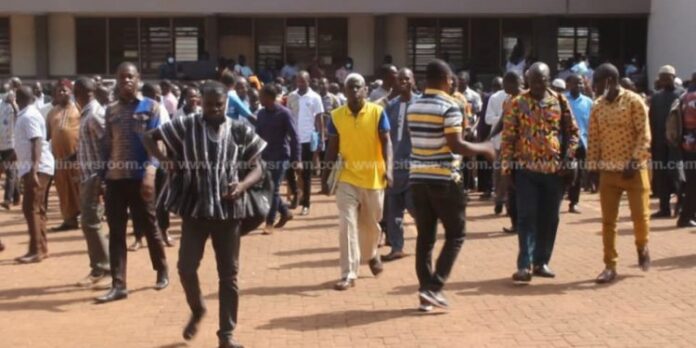 Various Teacher unions in the Tamale metropolis have boycotted academic activities following an assault on the headmaster of Nyohini JHS block B and two others last Thursday by some unidentified men.

According to the teachers, headteachers in the metropolis have received several threats on their lives whilst a few have been assaulted.

The teachers say they feel unsafe at work, and until authorities address their concerns, they will not go back to school.

The headteacher who was assaulted, Rev Lawrence Yiripari told Citi News that, when men entered his house, “The quickly entered, held my smock and started slapping me. They didn’t greet me. I didn’t say anything to provoke them”.

Speaking to Citi News after presenting a petition to the Metropolitan Education Unit of the GES, the spokesperson for the Conference of Heads of Basic Schools in Tamale, Bismarck Kwadjo Ampomah, explained that though the reason for the attack is unknown, they suspect some teachers as being the instigators.

“We realised that it had to do with the mass internal transfer done by the directorate somewhere in November last year.”

“We believe that these teachers are resisting these transfers…As they cannot come out openly to cause such harm, they have influenced the community to come in because the mindset is that the headteacher is causing the transfers.”

Meanwhile, the Metropolitan GES Director, Amatus Tuj-uu, who received the petition, sympathized with the teachers but pleaded with them to return to school as authorities investigate the matter.

“We will try as much as possible to get to the bottom of the problem and find solutions to it,” Mr. Tuj-uu said.