The victims of the Talensi mining pit collapse were not illegal miners – Small-Scale Miners Assoc. 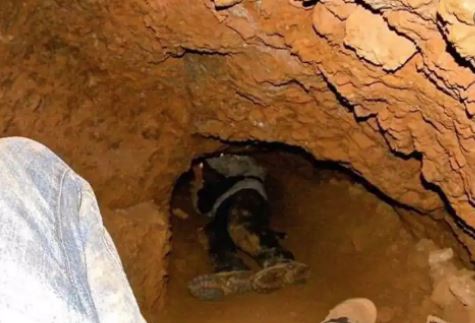 The Upper East Regional Chairman of the Small-Scale Miners Association, Tampoare Robert Boazor, has clarified that the nine persons who have been confirmed dead after they were trapped in a mining pit in Talensi, were not illegal miners as some reports have suggested.

He said the deceased were among regular workers at a dedicated mining site in the Gbane area.

Speaking on Eyewitness News on Thursday, Mr. Bazoa said the site where the incident occurred has been in use for over 10 years.

“The entire area is gazetted for small-scale mining. It is not an area for illegal activities, so people have gone to acquire licences to do their job. The pits are there and people have been working there for over 10 years now,” he said.

The bodies of nine miners were retrieved two days after a rescue mission by a joint security team together with officials of the National Disaster Management Organization, (NADMO).

Police say the deceased were miners trapped in a pit at the Moabok mining site following a downpour on the night of Monday, May 31, 2021.

” The rescue mission started two days earlier, but Wednesday, we were able to retrieve nine of the miners who were trapped after the heavy rains. The Municipal medical office came in to examine the bodies, and he pronounced them dead” Upper East Regional Police Public Relations Officer (PRO), ASP David Fianko-Okyere said.

Tampoare Robert Boazor said they believe one more body is left underground, and efforts are underway to retrieve it.

This is not time such an accident has been reported in the Gbane mining area.

In March 2020, an illegal mining pit at Yamsok, a suburb of Yameriga also in the Talensi District, killed one person and injured another.

The deceased, Pii-Naab Joel, aged 20, and a native of Yamsok, was mining in an illegal mining pit with his colleagues when the pit caved in

Other collapsed mining pits in Ghana

In November 2020, an illegal small-scale mining pit in the outskirts of Ayanfuri in the Central Region collapsed and trapped eight persons between the ages of 24 and 35 years.

The illegal miners were rescued by residents and rushed to the Dunkwa on Offin Government Hospital where they were pronounced dead on arrival.

A similar situation was recorded in October 2020, where five persons died when they were trapped in a mining pit at Ayamfuri in the Upper Denkyira West District of the Central region.

15 others who were also trapped in the cave sustained varied injuries after the incident.

Just recently, Anglogold Ashanti retrieved the body of a miner, who together with other workers were trapped about two weeks ago after an underground mining pit caved in.

The underground mining pit is part of the concession of Anglogold Ashanti, Obuasi Mine.

The company in a statement said the miner’s body was retrieved on Saturday, May 29, 2021. It however did not give further details about the deceased.

The company says “a thorough investigation into the incident has been initiated”.

Few days after the Anglogold incident, three persons were also confirmed dead in a mining collapse incident at Breman Brofoyedur in the Upper Denkyira West District of the Central Region.

Police in the Central Region arrested two suspects over the incident.