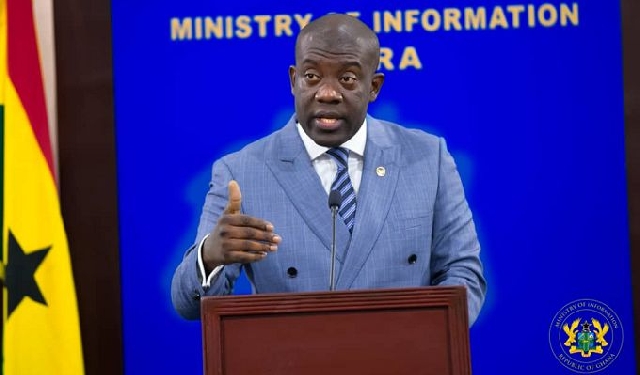 Information Minister, Oppong Nkrumah has quashed attempts to draw similarities between the 2020 US and Ghana Presidential elections.

According to him, attempts by some to suggest that a win by Republicans in the US will lead to a win by the NPP in Ghana, are unfounded.

Mr Trump in the US has no similarity as a candidate to President Akufo-Addo of Ghana. While Nana Addo is delivering several impacting programs including successes in the covid fight, the case of the US may be different.

“While Mr Biden was not rejected at the polls by voters in 2016, Mr Mahama was massively rejected by Ghanaian voters.”

“While Mr Biden’s running mate Senator Harris is an accomplished senator who has added a spark to his candidature, same cannot be said of the NDC.”

The lead up to the 2020 general elections in Ghana has seen political analysts and social media commentators draw plausible conclusions based on the historical political similarity that exists between Ghana and the US with some arguing hypothetically that the results of the US elections could one way or the other decide Ghana’s electoral outcome.

However, responding to the matter for the first time on Accra based Okay FM on Wednesday, Mr. Nkrumah was quick to shoot down the assertion emphasizing that elections are won purely based on track records and no historical antecedent.

He said the successes chalked under the ruling government is what will grant it success in the upcoming polls and not any political historical similarity.

“In 2016 there was a similar myth that you cannot win the Presidency if you are not named John. Nana Addo beat John Mahama at the time despite this claim. It is about your hard work and not such comparisons.” He concluded.