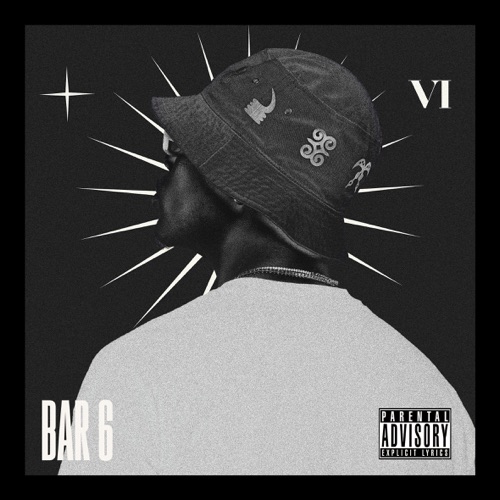 For his sixth in the now landmark series, the rapper’s abode with Africa’s Top 10 rap hierarchy is no longer guesswork, but absolute. ‘’BAR 6’’ is available on all digital streaming platforms globally here: https://fanlink.to/BAR6

In the decade gone, E.L reached escape velocity and shot for the moon. He was simply out of this world, leaving behind a trail of ubiquitous songs that embodied his then comprehensive style. But what was next? Well, in 2014 his conquest to become the ‘’Best African Rapper’’ (BAR) begun and after seven long years, he stares over a soon-to-be grateful continent right after placing his sixth Infinity Stone – ‘’Bar 6’’ in its groove.

A truly dense mixtape that makes his third studio album ‘’WAVs’’ feel like lightweight, E.L’s bite force is still strong and much closer to his wheelhouse of hardcore Hip-Hop. There’s a total of 14 songs amounting to 54 minutes, aside a roster full of rap-hungry megalomaniacs which include the likes of Joey B, Tulenkey, Kev the Topic, A-Clipse and Lyrical Joe to name a few.

Upon play, the first four songs are on the A-side – ‘Time’ through to ‘This Country’ – the former being an introspective opener on E.L’s ascent, to which he teasingly cites: “Can’t believe I shit on you niggas six times chale” and the latter being the heir to his ‘State of the Nation Address’ off the ‘’BAR 2’’ mixtape as he retouches on his motherland’s woes, though in a cynical tone. ‘Frodo Baggins’ (feat. Nova Blaq) plants itself among the aforementioned four, rocking that super tight – ‘’Ten years into my bag, no coming short like Frodo Baggins” line, as the project draws in on its run of star-studded features: ‘I Feel Like I’m the Shit’ (feat. Kev the Topic), ‘Kaafe Mafe’ (feat. Phyl4lyph & A-Clipse), ‘Dracula’ (feat. Lyrical Joe), the pre-released ‘Sudwe’ (feat. Joey B & Tulenkey) and ‘Rowdy’ (feat. Young Pabi & Temple), all putting rap fanatics on edge.

Towards its end however, the intensity gets a bit easy; ‘On God’ has the rapper toss in a couple of playful lines on the trap-like production, next to another song self-appreciative of his style – ‘Different’ (feat. Dr Laylow & Gambo). ‘The Bar Cypher’ isn’t far off from the previous two, but is the record’s chunkiest. It has E.L hand his platform to 6 budding guest artists: EL Deezy, Kimilist, Kojo Vypa, Gingsen and Hackey, all delivering that priceless cypher experience before the record rounds up with ‘Bar Out’ (feat. Kxng Tradey) and it’s solo close ‘Your Turn’.

Speaking with E.L about the series and what it is all about, the rapper shared: ‘’I consider this tape my social responsibility to keep hip-hop alive. I see so much talent around me and it casts my mind back to the times when I was an upcoming artist looking for someone to believe in me. I aim to keep using my platform to project and protect. It (Bar 6) is dedicated to all artists who feel like they have something special to offer. The goal is to encourage them to keep going against all odds and to do things their way’’.

On ‘’Bar 6’’, E.L’s aggression, uncanny pen game and ear for catchy production lives on, effortless in ferrying his rap legacy to where it belongs – everlasting plane.

Share
Facebook
Twitter
Pinterest
WhatsApp
Telegram
Previous articlePoland has accused Belarus of trying to cause a violent provocation following reports that hundreds of migrants are attempting to cross Poland’s border.⁠
Next articleSarkodie tops 20 Social Media Most Relevant Ghanaian Artistes in 2021