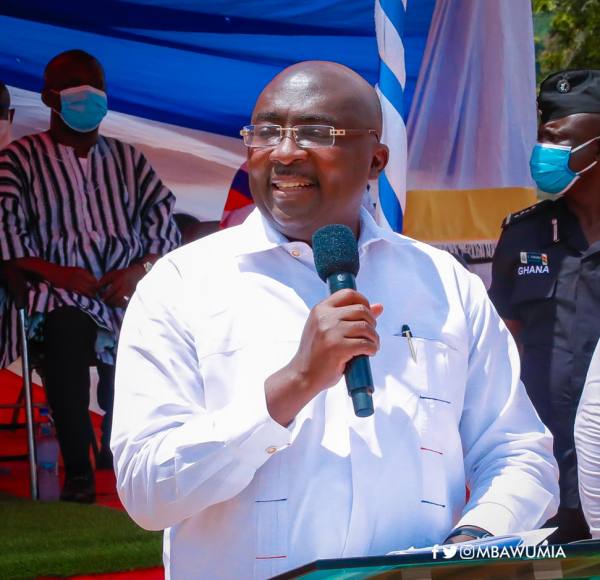 The Vice President, Dr. Mahamudu Bawumia has hit back at former President Mahama for claiming that there is nothing to show for the amount of money the government has borrowed since 2017.

The former President claimed recently in a media interview that the Akufo-Addo government has borrowed excessively with nothing to show for it.

But Vice President Bawumia hit back swiftly with a detailed post on Facebook, telling the former President to “read” his post and be informed of what the Akufo-Addo government has done in terms of infrastructure development in all sectors.

“The former president, John Mahama recently asked what the Government of the NPP has used the monies it has borrowed during its term for. I will provide the former president with some answers and only ask that he takes his time to read,” Dr. Bawumia wrote.

The Vice President then listed in detail various projects and initiatives the Akufo-Addo government has undertaken since assuming office in 2017.

In the road sector, Dr. Bawumia noted that the Akufo-Addo government has undertaken 751 km of asphaltic overlay since 2017, which he said is the largest in the country’s history.

The Vice President noted further that 46 cocoa roads have been completed since 2017, and also listed in detail 51 major road projects the government has undertaken since 2017.

In addition, the Vice President listed five interchanges that are being constructed, as well as a total of 79 steel, concrete and footbridges across the country, which he noted that 49 have been completed.

Dr. Bawumia also listed in detail government’s investment in the health sector, noting that 69 clinics, 55 maternity blocks and 439 CHPS compounds have been built so far.

The Vice President also listed the ongoing construction of 9 district hospitals at Dronbonso, Twedie, Manso Nkwanta, Sobronum, Jumapo, Adukrom, Chiase Kwabeng, Anyinam, a 600 bed regional hospital in Koforidua, a 500 bed military hospital in Afari, as well as the construction of a children and maternity block at KATH.

On inherited projects in the health sector, the Vice Presidemt added that out of 30 health infrastructure projects inherited by the NPP,  16 of them including 10 polyclinics and 2 district hospitals have been complete.

Vice President Bawumia described the government’s investment in the education sector as massive, and provided details to buttress his claim.

“We have undertaken a total of 3,251 infrastructure projects in the education sector. Of these, 1,597 have been completed and 1,654 ongoing,” Dr. Bawumia noted.

On industrialisation, Dr. Bawumia listed that 76 comoanies are in operation and 107 are under construction under the One District One Factory initiative.

Having provided evidence of government’s massive investment in infrastructure in all sectors for the information and education of the former President, Dr. Bawumia threw a parting shot at Mahama.

“It is clear that the NPP government has not used the monies borrowed to invest in guinea fowls that subsequently flew to Burkina Faso,” Dr. Bawumia said sarcastically, in reference to the much-maligned muliti-milliom dollar investment in guinea fowls by the erstwhile NDC regime under the leadership of Mahama NDC regime.