‘We thought Benzema was fine when he reported for France duty’ 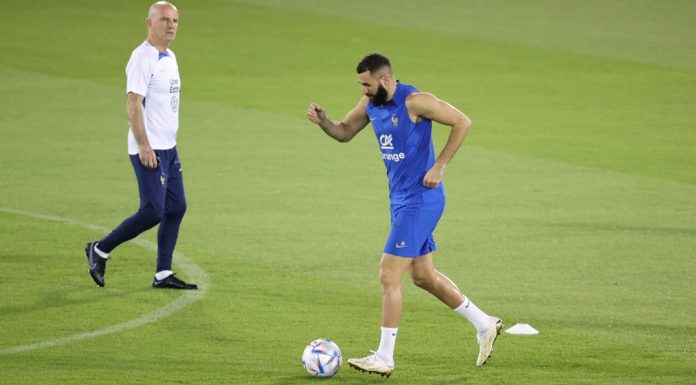 When France striker Karim Benzema reported for World Cup duty his Real Madrid teammates, including Brazil’s Eder Militao, thought he was fine but the 34-year-old was ruled out of the tournament after suffering an injury in training on Saturday.

When asked about Benzema’s condition in the last few weeks after he missed nine of Real’s last 15 matches due to what the club called “thigh fatigue”, Militao said the Frenchman had been struggling to get over the injury in time for the World Cup.

“He was holding on (not playing) as much as he could with the club because he felt a discomfort, but when he reported (for France) we thought everything was fine,” Militao told reporters ahead of Brazil’s World Cup opener against Serbia on Thursday.

“I didn’t talk to him but (Real’s Brazil forward) Vinicius (Jr) did – he (Benzema) felt another discomfort. I wish him the best and that he recovers soon.”

His injury struggles started on 6 September in the Champions League game against Celtic, when he had to be substituted early in the first half and missed Real’s next three games.

He played in the next two but missed the game at Getafe before featuring in the following three games, scoring twice.

However, he missed five of Real’s last six matches, playing only the last 28 minutes of their 5-1 Champions League win against Celtic early in November.

Benzema had a stellar campaign with Real last season, scoring 44 goals in 46 games in all competitions as he helped guide them to a LaLiga and Champions League double.

France, already without midfielders Paul Pogba and N’Golo Kante plus striker Christopher Nkunku because of injury, open their campaign against Australia in group D on Tuesday.

Manager Didier Deschamps decided not to replace the injured Benzema in his World Cup squad, leaving France with 25 players.