Wounded Argentina must put Saudi trauma behind them 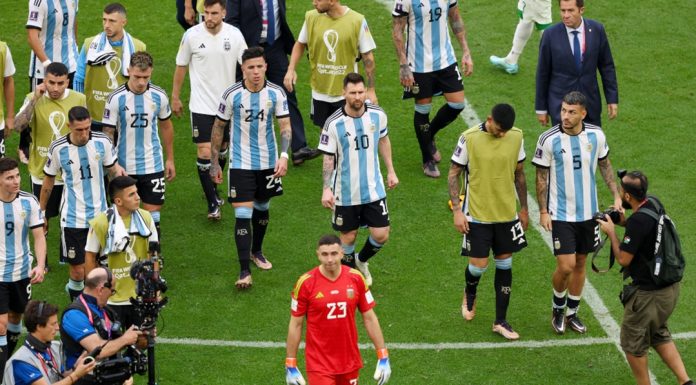 Lionel Messi’s Argentina must put aside injured pride after a shock defeat by Saudi Arabia and summon the fighting spirit of their similarly-bruised 1990 predecessors if they want to bring home the World Cup for a third time.

Messi’s fifth and final attempt to match Diego Maradona’s immortality among Argentinians by winning football’s greatest prize could not have started worse, with Tuesday’s 2-1 defeat to the Saudis one of the tournament’s biggest upsets.

Yet he and his disconsolate team might take heart from 32 years ago when Argentina began the World Cup in Italy with a shock loss to Cameroon but still went on to reach the final.

“Can we still win it? Of course,” said former Argentina defender Pablo Zabaleta, citing the 1990 run, although the South Americans were to lose that final to West Germany.

“There is still a long way to go.”

Argentina’s players looked traumatised as they trudged off the Lusail Stadium pitch on Monday after losing their 36-game unbeaten run while the Saudis celebrated around them.

But as the dust settled, Argentina’s mettle returned and their focus turned to two enormous Group C games coming up against fellow Latin Americans Mexico and often tricky Poland.

“Now’s the time to be more united than ever, to show our true strength,” said Messi, 35, in a captain’s call to arms. “It’s up to us to fix what we did badly.”

‘DO IT FOR MESSI, MARADONA’

“We have no option but to lift ourself up and go forwards. We will calmly analyse their goals and we must work on the aspects that didn’t go well,” he said.

Scaloni may start by practising beating the offside trap: Messi and Lautaro Martinez put the ball in the back of the net four times between them against the Saudis in the first half, but only one counted, Messi’s penalty.

Argentina had seemingly found a world-class defence in recent times to match their scintillating strike force, but it was found wanting in a crazy 10-minute spell when the Saudis cantered past them to score twice and turn the match.

Scaloni must quickly reinstill the meanness and steel that had served Argentina so well on their remarkable unbeaten run since mid-2019. That lifted them to third in the global rankings and made them a firm favourite in Qatar.

“We simply have to do this – for Messi now, for Maradona in heaven, for all of Argentina,” said Lionel Rodriguez, draped in a blue-and-white flag adorned with Messi’s face as he walked with friends on a street in the Qatari capital Doha.

“The Saudia Arabia game was an aberration. Let the world enjoy it for now. We are a great team, we will have the last laugh! Watch out Mexico, that’s all I’m saying.”