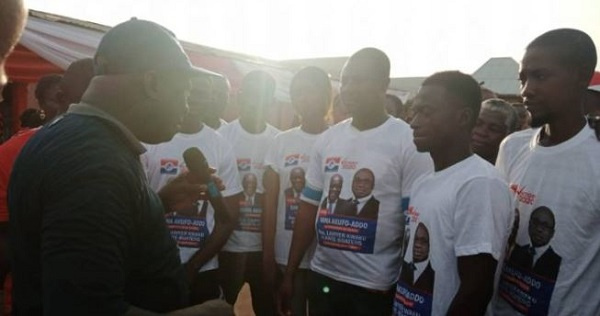 The fortunes of the National Democratic Congress (NDC) in the upcoming elections has been dealt a blow following the defection of 150 members of the party in Ofoase, a town in the Ashanti Region to the governing New Patriotic Party (NPP)

The group, according to TheGhanaReport announced their decision to cross carpet to the other side of the political divide when the NPP Parliamentary candidate of the area visited the town as part of his campaign tour.

Explaining the reason behind their decision to switch camps, the members said their lives have been impacted positively by the policies of the NPP government.

The spokesperson of the group, Seidu Osman explained that with Nana Akufo-Addo in charge, they are confident about the future of the country and urged other NDC members to switch to the NPP.

“We were made to believe in 2008, 2012 and 2016 that the campaign promises by His Excellency Nana Addo Dankwah Akufo-Addo were just empty talks and a desperate desire by Nana Addo to at all cost become president but for the four years that Ghanaians gave the NPP and Nana Addo the mandate, we have seen and benefited from his good works,” Spokesperson for the group, Seidu Osman said.

“We believe if Nana Addo and Hon. Kwaku Asante Boateng are rewarded with another 4 years, they will do wonders and Ghana will be transformed,” Mr. Osman added.

They were received by Kwaku Asante Boateng who is the MP for the area and NPP executives.

The defected group include branch executives of the opposition NDC.

This adds to growing report of NDC members defecting to the NPP.

In September, over hundred members of the party in the Awutu Senya West Constituency also joined the NPP.

In the same month, a leading member of the party in the Asawase Constituency, Murtala Mohammed also defected to the NPP.